Femise > Articles > The 2015 review of the ENP: the transformative power of the EU re-loaded? 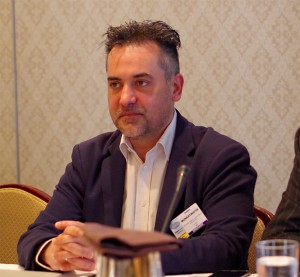 Acknowledging the limited effectiveness of the ‘more for more’ approach, the November 2015 review of the ENP emphasised the need for a “new approach”, entailing greater flexibility (differentiation), fewer objectives and enhanced local ownership. In my recent presentation at the 2016 FEMISE Conference in Athens I sought to evaluate the proposed shift, offering a new insight on the reasons for past failures and the need for a new approach. Extending a model used previously by Tovias and Ugur in their 2004 article in European Union Politics, I conceptualised the relationship between the EU and the associated countries as one of exchange – whereby the associated countries “export” domestic reforms to the EU in exchange for material or political rewards; and the EU “exports” such rewards in exchange for domestic reforms.

In the absence of externalities or commitment problems, equilibrium in this framework is derived by the intersection of the two actors’ “offer curves” (see Figure). At point A, a mutually acceptable agreement is reached, concerning the amount of reforms to be implemented locally (RFenp) and the extent of rewards (association, financial assistance, market access) to be offered by the EU in return (RWenp). My analysis departs from this “perfect market” framework and shows how the presence of positive externalities associated with domestic reforms may result systematically in imperfect implementation of the “perfect market” agreement, with a suboptimal amount of domestic reforms and under-provision of EU rewards. The existence of such positive externalities is easy to see when considering the (social) costs of non-reforms: from the democratic backsliding in some of the New Member States and Candidate countries (Hungary, Macedonia) to the political instability in parts of the ENP (Egypt, Syria, Ukraine) and even the financial instability caused by the Greek crisis inside the Eurozone. Such positive externalities imply that the socially optimal “demand” for reforms is to the left of the EU offer curve, so that the socially optimal equilibrium is at point B (showing a higher level of reforms but with sizeably larger rewards). 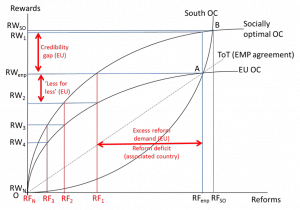 From there on, it is intuitive to show how the ENP negotiations can be entrapped in a vicious circle of “reform deficits” (“implementation gap” by the associated countries) and “commitment deficits” (“credibility gap” by the EU). Starting from the initial agreement at point A, the associated country observes that the reforms requested – given the level of rewards RWenp – are well beyond the socially optimal, implying an excessive demand for reforms by the EU (RFenp – RF1). Inversely, that the rewards on offer – given RFenp – are well below the socially optimal, implying in turn a credibility gap (non-commitment) by the EU (RWenp – RW1). Given that the rewards are fixed, in response, the associated country traces RWenp on the socially optimal offer curve and implements reforms to the level of RF1. From the viewpoint of the EU, however, this is perceived as a sizeable reform deficit (under-provision of reforms). Responding to its own “more for more” principle, the EU tightens its rules and reduces its rewards to RW2, tracing this time RF1 on its own offer curve. At that point, the associated country observes a further EU commitment deficit, resulting in further reform retrenchment (to RF2 and so on).

The process can result in a full stalling of reform effort, with the EU freezing any financial assistance or association concessions and the associated country implementing no democratisation or market liberalisation reforms ({RWN, RFN} at point O). To unblock this deadlock, the EU has to become more ‘generous’ in its rewarding of reforms (essentially shifting its offer curve closer to the social optimal so that, eventually, a shift can occur from {RWN, RFN} to {RWSO, RFSO}). But, to do so, the EU has to address a problem of adverse selection: that the more generous rewards may attract more rent-seeking governments with lower genuine commitment to reforms. Seen from this perspective, this is perhaps exactly what the “new approach” in the revised ENP tries to accomplish: the ownership principle allows associated countries to set out their own objectives for reforms, thus encouraging credible (and genuine) commitment; while the differentiation principle affords the EU the flexibility to engage more deeply (and reward more generously) only those governments that are deemed credible and sufficiently ambitious in terms of their reform effort and commitment. For the rest, the EU imposes fewer conditions and offers ‘less for less’ in line with the ‘more for more’ principle.

There is however a fundamental problem with this approach: although it can optimise the amount of reforms pursued by reform-minded governments, at the same time it waters down the incentives offered to non-reformist governments to engage with the EU, thus essentially weakening further the EU’s “transformative power” and “democratisation capacity”. In this sense, the proposed ENP reforms may be improving the efficiency of the policy in economic terms but are likely to reduce its effectiveness in terms of its political objectives.

For the Powerpoint of the article presented during the FEMISE 2016 Conference, please click here.