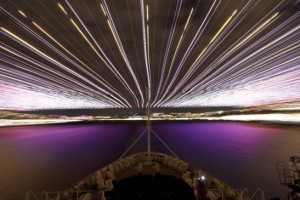 The cost of transport is with no doubts a determining factor in a country’s trade capacity and its competiveness on the international scene. Bearing this in mind, the Forum Euroméditerranéen des Instituts de Sciences Economiques (FEMISE) recently published a comparative study of transport systems in Poland and Turkey.

Turkish truck drivers who load their goods on a ship, pick them up again at their destination port after flying there by air… The logistics deployed by the Turkish transport companies who are behind the UN RO RO company (now in the hands of an American investment fund), has become a reference in logistics organisation. An example to follow but one with a drawback: the working conditions and salaries of the Turkish drivers are a long way off European standards.

At the end of 2012, the CMA CGM shipping group launched its new “Citrus Express” service to export citrus fruit from Turkey to cater for the fast-growing demand in the east. The innovative systems of the private transport companies boost economies and help develop a country’s presence on foreign markets. But innovation alone is not enough. 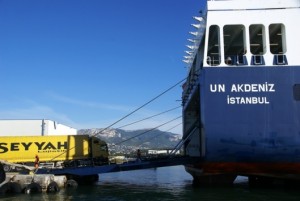 Thousands of ships pass through the Bosporus each year… 75% of goods (in value) and 50% (in tonnage) travel the seaway. The contribution of transport companies to a country’s wealth can vary greatly from one country to another. They represent 3.6% of the GDP in Poland and 13.3% in Turkey (2011).

All these criteria were studied in detail by the FEMISE team of researchers in the FEM35-09 report “Facilitation of Transportation in Turkey and Poland: A Comparative Study“. In this report, the economists underline the complete domination of the road haulage industry in the two countries compared to the much lesser used rail transport system.

The Polish government controlled the transport companies and infrastructures up until 1990 and a lack of maintenance of the tracks and rolling stock led to the decline of the sector. The modal rail freight share dropped from 50% to 27% between 1995 and 2005.

The accession of Poland to the European Union in 2004 was a real boost for the air cargo sector that had been marginalised during the 90s but re-emerged and boomed thanks to what are referred to as the “open skies” agreements and the liberalisation of airport services and operations. In Turkey, air cargo operations are developing in a quantitative and qualitative manner.

As a member of the Trans-European Transport Networks (TEN-T), Poland must ensure the interoperability of its rail network with the high speed rail network while as a transit country it may be able to benefit from European subsidies in the coming years to modernize its infrastructures.

Photos:  First photo: “Thousands of ships pass through the Bosporus each year”  by Pete Hawkins)