This research seeks to contribute to the assessment of refugees impact within labor markets and differing countries’ economies.

The country review and the empirical results lead us to four main policy recommendations.

As for the majority of countries no connection between the Syrian refugees’ inflow and unemployment or wages has been found, first, we recommend strengthening the existing trend of removing refugee-specific barriers in the labor market.

In addition, in countries with high minimum wage, temporary exceptions should be permitted in order to promote the employment of refugees.

Another important recommendation is to provide temporary migration opportunities in line with the labor market needs and address shortage of workers in some occupations, such as agriculture. A further investigation is needed based on each country’s needs.

Our last policy recommendation is to offer targeted temporary work opportunities and programs, as some European countries are already doing, both to local population that might be affected by the integration of refugees, and to the refugees themselves.

« Med Change Makers » are text and video-based interviews that allow dynamic researchers of the FEMISE network to illustrate how their research addresses a policy-relevant question and how it contributes to the policy-making process in the Euro-Mediterranean region.

Boosting female labour market participation rates in the MENA region : Can collaborative economy be of help? ”

Autthor of the MED BRIEF, Dr. Katarzyna Sidlo is a FEMISE researcher who actively participates in the activities of the network. Her work assesses the potential of the collaborative economy to increase women’s labor force participation in the MENA region (Middle East and North Africa). More specifically, it examines ways in which the collaborative economy can enable women who are interested to join the labor market.


The collaborative (or sharing) economy refers to business models that create an open marketplace for access to goods and services thanks to the use of modern technology. It covers a variety of sectors, is rapidly emerging throughout the world and provides new opportunities for citizens who are able to get what they need from each other instead of going to large organizations (at least that is the theory). Some of the best-known examples of collaborative economy businesses are car-hailing applications such as Uber or Careem, peer-to-peer accommodation website Airbnb, crowdsourcing platforms Kickstarter or Indiegogo, or online marketplace Etsy. Many of them are already household names.

Well, firstly according to the World Bank, 59% of individuals in the MENA region are internet users. Access to internet as such is therefore not a problem everywhere in the region, although of course in many places broadband is expensive, slow and generally unreliable and in many other, especially urban areas, simply not yet readily available. More importantly, however, I would look at the problem stated in the question in a different way: the potential to make use of what collaborative economy has to offer can be one more argument in favour of extending efforts to provide access to internet to as many people as possible. If internet is not available in a village in the south of Egypt, chances are that neither are many job offers. By providing inhabitants of such a village with access to internet, you give them an opportunity to enter the labour market as well. For instance, they could study for free on one of the many Massive Open Online Courses (MOOCs) platforms available – increasingly also in Arabic – and gain skills that will allow them to find employment. Or they could give Arabic classes online (one platform, NaTakallam, offers such classes taught by refugees). All without having to emigrate and leave their villages or, indeed, houses.

I strongly believe that even if just a small percentage of people in a given society use this chance, it will be worth it. So while the sharing economy will by no means solve all or even most of the problems related to the low female (and male) labour force participation – it would not even if virtually every single person in the region had access to a fast, affordable, and reliable internet – it has a huge potential to contribute to the alleviation of this problem.

Women in the MENA region wishing to join the labour market face numerous obstacles, from practical ones (lack of jobs, difficult commutes) to those of socio-cultural nature (restrictions on outside-of-the-house activities, caring responsibilities) nature. Sharing economy can help to overcome a number of those. Most importantly, it allows women to perform work – and indeed create their own businesses – from the comfort of their own homes. Thanks to this even those women, who due to various family- or culture-related reasons would not undertake paid work outside of the house, can earn their own income (and economic empowerment is a great step towards social and political empowerment). Another good example are ride-hailing services, providing a safer, more reliable and cheaper (compared to traditional taxis) alternative to faulty or point-blank non-existent public transport, oftentimes believed to be not appropriate for use by non-accompanied women. An extreme case in point was Saudi Arabia, where prior to lifting the ban on women driving 80% of Uber’s and 70% of Careem’s clients were female.

One of the main advantages of the sharing economy is its flexibility. However, this flexibility can also oftentimes mean lack of clarity for instance in terms of liability, taxation, consumer protection, licensing or insurance. Think about ride hailing services such as Uber, Careem or Lyft: in case of an accident, whose insurance should cover the damages? As drivers are using their private vehicles they may not possess commercial, but rather personal insurance, which can lead to insurers denying the claim. Should the company owning the platform through which drivers are matched with clients be liable at all? Are the drivers even their employees or clients making use of the platforms features? The answer to that question determines answers to many subsequent ones related to social protection (maternity leaves, pensions, health insurance etc.) of the collaborative service providers. Another issue is of course taxation.

Unfortunately, there are no easy answers. The European Union is for instance pondering issuing EU level guidelines but currently whether and to what extent the sharing economy should be regulated is still a matter of a lively debate. The big question is of course how to regulate so that you don’t overregulate and therefore kill the flexibility that makes participating in sharing economy so convenient.

In the MENA region, countries should think about solutions that work best under their specific circumstances. For instance, a voluntary health insurance scheme could be introduced to help those earning their income within the sharing economy to gain social protection (an interesting study on this topic for Tunisia by Khaled Makhloufi, Mohammad Abu-Zaineh, and Bruno Ventelou has been published recently by FEMISE). In Jordan, where the government is working on a tax reform, the question of imposing corporate law tax on collaborative platforms could be investigated.

Collaborative economy has it for-profit and non-profit dimension. Speaking of increasing female labour market participation in the MENA region and the role of CSOs and NGOs, we should probably focus on the latter. The spectrum of possibilities is really broad. Both types of organizations could for instance facilitate women organizing their own car pooling schemes, helping each other to safely and conveniently get to and from work on daily basis. They could set up collaborative working spaces, where female entrepreneurs could set up and run their businesses in a friendly, safe and inspiring environment. They could create online courses in local dialects of Arabic, providing free training to women thinking about starting their own business or work on translations into Arabic of courses which are already available on various MOOC platforms and which provide knowledge and skills that make finding a job easier. All that – and much more – can of course be done in collaboration between different stakeholders. After all that is what collaborative economy is all about.

The MED BRIEF is available for download by clicking here. 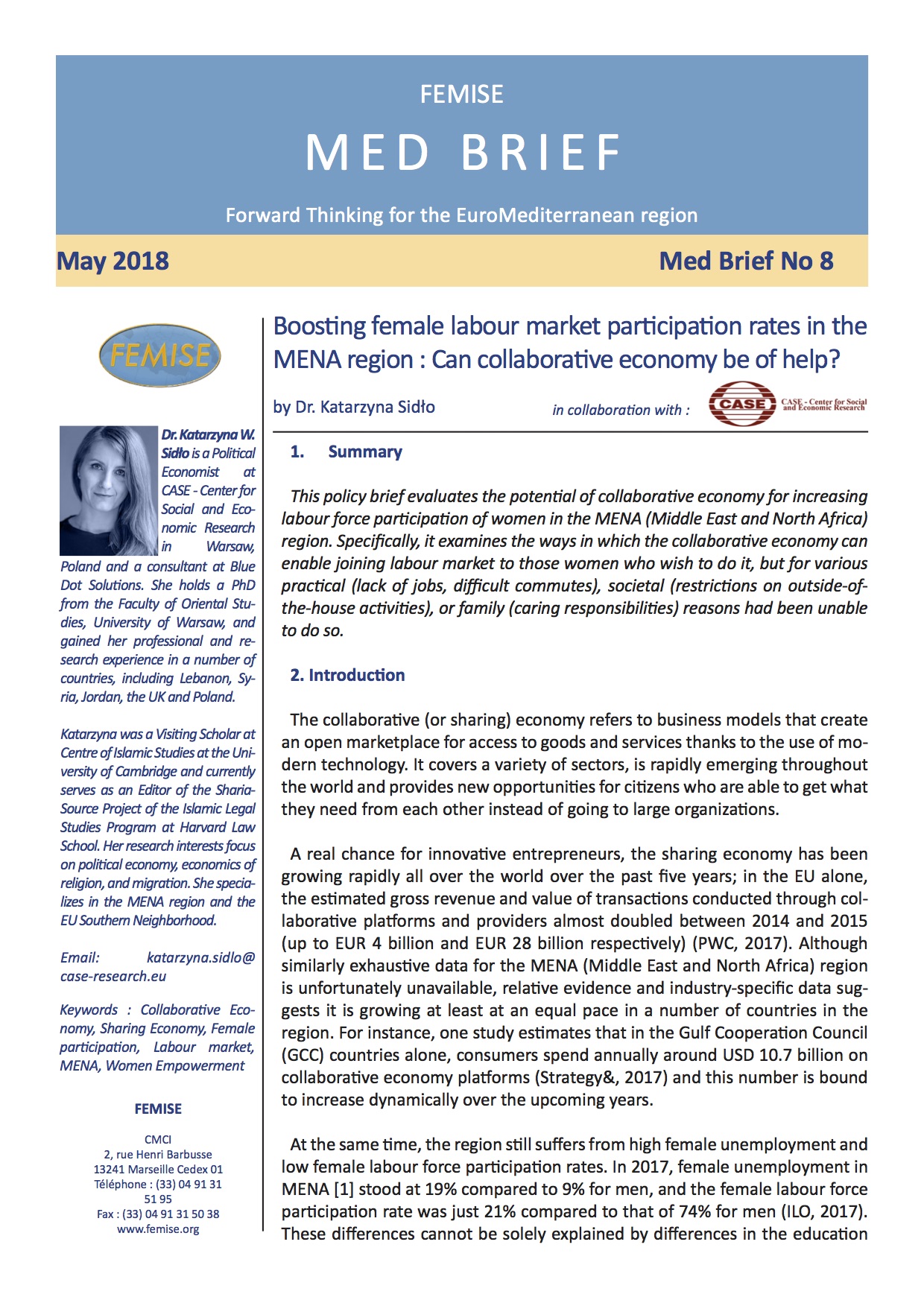 
The eighth issue of MED BRIEF “Boosting female labour market participation rates in the MENA region : Can collaborative economy be of help? ”is available by clicking here. 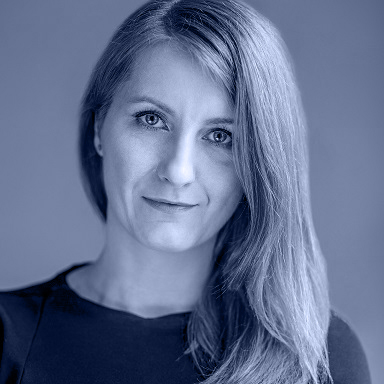 This policy brief evaluates the potential of collaborative economy for increasing labour force participation of women in the MENA (Middle East and North Africa) region. Specifically, it examines the ways in which the collaborative economy can enable joining labour market to those women who wish to do it, but for various practical (lack of jobs, difficult commutes), societal (restrictions on outside-of-the-house activities), or family (caring responsibilities) reasons had been unable to do so. 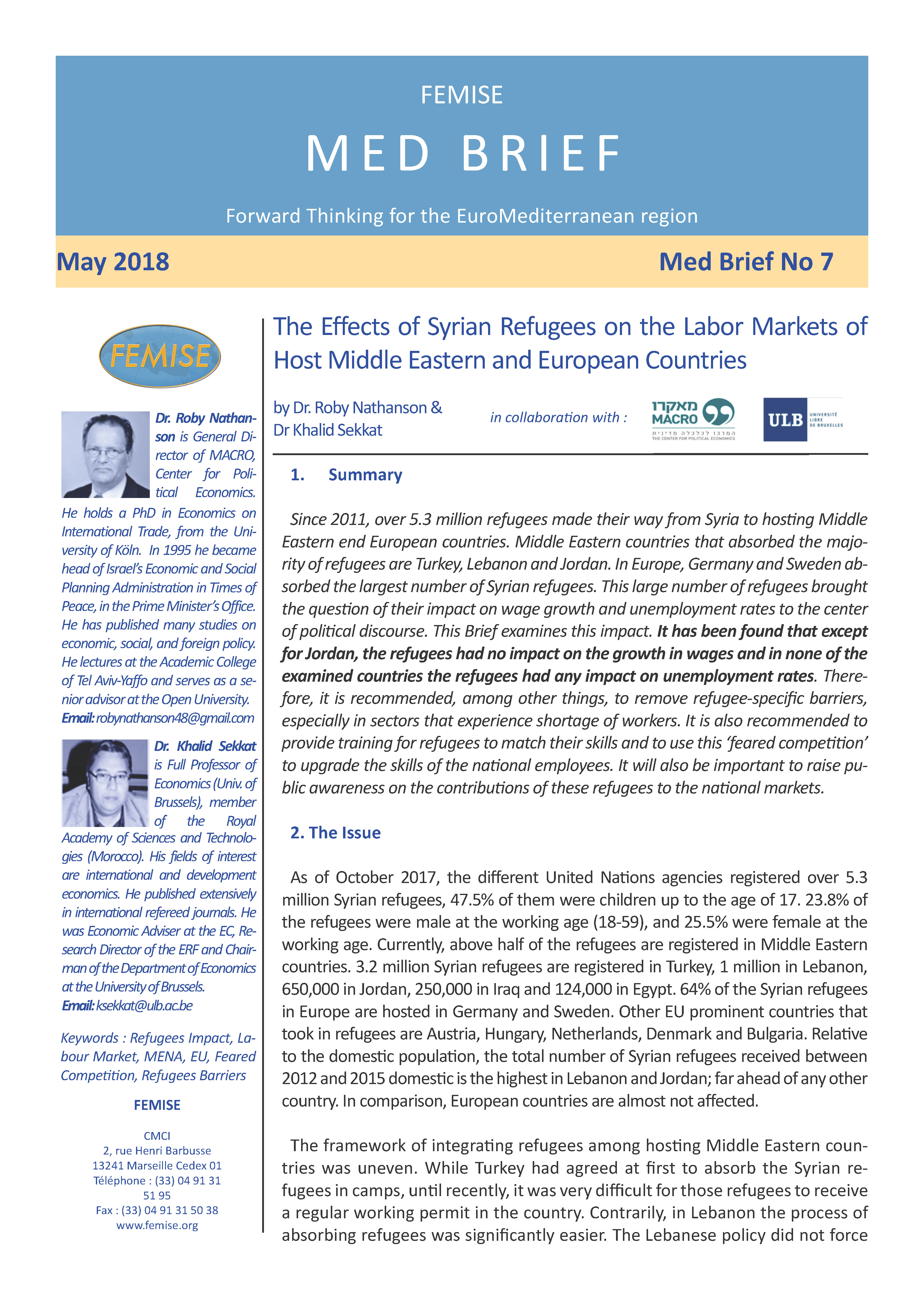 Another group of research reports funded by FEMISE, through the European Commission grant, have been the subject of a new edited volume. Published Under the title of : “The Socio-Economic Impact of Migration Flows- Springer”, the volume that is edited by Andres Artal-Tur, Giovanni Peri and Francisco Requena-Silvente is considered a new contribution to the knowledge about issues related to migration.

The volume is a value added because:

Downland the table of contents, preface and acknowledgement (in pdf)