Micro, small and medium enterprises (MSMEs) constitute about 95% of total enterprises in the South Med region and are considered the driving forces of economic growth, job creation and green and inclusive growth. Entrepreneurs, particularity start-ups, still face numerous challenges when it comes to establishing, promoting and running their businesses. Providing them with support through innovative initiatives and enhancing the ecosystem where they operate will contribute to their development. In their turn, entrepreneurs will contribute to achieving several of the Sustainable Development Goals (SDGs).

It is in this context that the Next Society (TNS) project and FEMISE decided to launch this initiative to produce “The Next Society Policy Briefs Series”. This series of briefs aims to better understand the challenges faced by entrepreneurs (through the lens of the entrepreneurs themselves) and to provide tailor-made operational policy recommendations. These briefs are based on collaborative work and exchange of knowledge and experience between the researcher(s)/author(s) and the entrepreneur(s), many of which have benefited from TNS project, ensuring their relevance and impact. 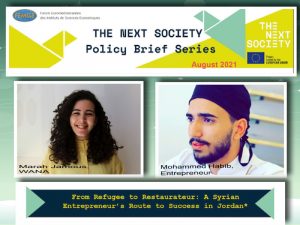 Ten years have passed since the outbreak of the Syrian conflict, and it “remains the world’s largest refugee crisis.” After a decade of continuously hosting Syrians in Jordan, today they form 10 per cent of the Jordanian population. Making Jordan the second host country of refugees per capita in the world. It is believed that the participation of these refugees in the labour market can positively contribute to the Jordanian economy, this has made their inclusion necessary. The Jordan Compact that was introduced in 2016 was the first in the South-Med region to rightly address the labour inclusion of Syrian refugees in host communities. Five years in, Jordan was able to resolve many of the issues addressed, but not all.

This policy brief will present some of the challenges that are faced by Syrian refugees in Jordan through the lens of a resilient young Syrian refugee who was able to join the Jordanian labour market through a joint venture with a Jordanian partner and start a food business. This young refugee, not only find a way out of unemployment, which is hitting the highest record of 50% among the youth in Jordan, but also found innovative and creative ways to use his knowledge and skills to generate his own income through his startup despite the challenges. This case study shows that the inclusion of refugees in the Jordanian labour market can be facilitated if the capital requirement for opening an individual establishment can be reduced, easing access to financial services, clarifying legislation on joint-ventures, and increasing the provision of vocational trainings for Syrian refugees.

Watch this video by the author of the Brief who explains the situation of the Refugees in Jordan and presents the entrepreneur who is sharing his experience,  highlighting the challenges and providing recommendations and lessons learnt.


`*This Policy Brief is produced as part of the series of TNS/FEMISE Policy Briefs on “Entrepreneurship in South Mediterranean Countries” that is undertaken in partnership between FEMISE and ANIMA Investment Network.