Femise > Conferences and Seminars > Agenda and Members' News > Relationships between multilateral institutions and the nation states of the Mediterranean basin : Summary Report of Toulon Conference

Relationships between multilateral institutions and the nation states of the Mediterranean basin: where do the spaces for cooperation and sources of tension reside? 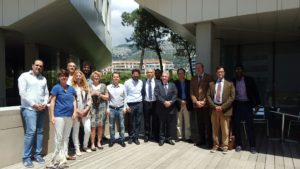 PROSMED conference with the support of FEMISE, Photo FEMISE

The Barcelona process, signed in 1995 set down the bases for cooperation between the EU and the countries of the Southern Mediterranean. Twenty years on, however, it is becoming apparent that the process has not been as successful as was hoped. The political, social and economic conditions on the two shores are no longer the same, and this has led to strained relations between the EU and the countries of the Southern Mediterranean. It is now increasingly difficult to have a clear idea of what the future of Euro-Mediterranean cooperation holds. Based on these findings, the organisers of the Université de Toulon (UTLN) and of FEMISE, decided to call upon the help of experts (European External Action Service, European Investment Bank, FEMISE, Institut de la Méditerranée) to discuss the question of cooperation between the European Union and the countries of the Southern Mediterranean. What are the current difficulties, which type of cooperation may we now envisage and what will be the future of the Euro-Med region? 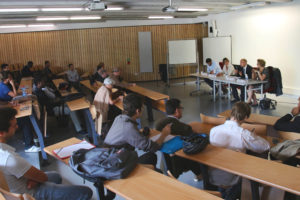 PROSMED conference with the support of FEMISE, Photo Univ. Toulon

After an introductory speech by Dr. Y. Kocoglu (Université de Toulon) and L. Lévêque (Université de Toulon), Dr. Constantin Tsakas (General Secretary of FEMISE and General Manager of the Institut de la Méditerranée) underlined that the theme of the conference was among the key questions studied by FEMISE.

The FEMISE network is a “tool” that acts as a bridge between a major institution, the European Commission, and the countries of the Southern Mediterranean. The Southern countries often seem to favour recommendations that stem from civil society (e.g. the universities and research centres belonging to the FEMISE network) that embrace a more flexible approach and render an overall picture of the social and economic realities of Southern countries that is sometimes more complete. FEMISE counts 95 members, among which more than half are from the South, and works closely with policy makers; it embodies this “common” voice, representing the point of views of both shores and, as such, is in a good position to pass on messages.

More tenuous relations between the EU and Southern countries 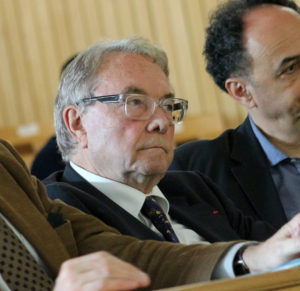 Professor Reiffers heavily underlined the need to face the fact that international trade also produces “losers”, those whose source of income is eroded by the opening-up of trade and the changes that this incurs; the agreements signed between the EU and the Southern countries do not sufficiently cater for this result and therefore do not make provision for redistribution policies that would guarantee sustainable growth in favour of the populations.

Lastly, M. Reiffers noted that one element is systematically absent from the agreements between the EU and the countries of the southern Mediterranean: that of human capital. The work factor has been analysed from the angle of security and the threat of immigration for the EU and not from the angle of a potential to be developed through training and qualification policies.

In the second part, M. Mingarelli (European External Action Service) also referred to the Barcelona process, which heralded a willingness to promote bilateral relations via association agreements, and a dialogue between the European Commission and partner countries on areas of mutual interest (energy, transport…). 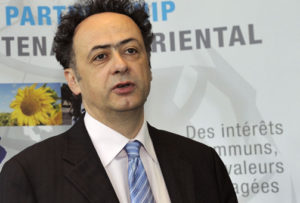 M. Mingarelli pointed out that in 2005, the European neighbourhood policy covered eastern Europe, the South Caucasus, North Africa and the Middle East. One of the objectives was to integrate the economies of certain partner countries (Morocco, Tunisia) within the EU single market.

Subsequently, the socio-political movements initiated by the “Arab springs” caught the EU by surprise, along with other powers such as the US or Russia. During this phase, the EU offered support for the political transition in the form, for example, of technical assistance for the amendment/drawing up of constitutions, the organisation of elections, the establishment of transitional justice measures, support to promote civil society stakeholders (press, trade unions, associations…).

Finally, armed conflict (Libya, Iraq, Syria) combined with terrorist risks, social uprisings and the migrant crisis created a climate of considerable tension in the region, making it difficult for the EU to define a clear and serene space for cooperation with the Southern countries. Over a 5-year period, the different conflicts in the region (particularly in Syria) have caused the displacement of millions of people, among which 10 million by the Syrian conflict alone, i.e. 1/3 of the population.

The need to redefine a Regional Vision 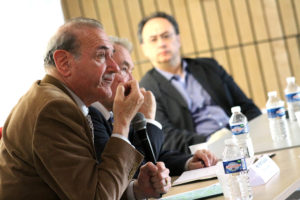 The Mediterranean is as fractured as it has ever been. This was the statement made by Mr Henry Marty-Gauquié (Honorary Director EIB France), pinpointing the fact that the Mediterranean is particularly sensitive and vulnerable to external shocks and crises. This is due to its socio-economic composition (cultural, social and economic mix and inter-dependence between the North and the South; low resilience towards economic adversity[1]) and to its geo-strategic location.

Over the past fifteen years, the Mediterranean has suffered one shock after another, often of non-Mediterranean origin, but that have struck the region with particular force (e.g. the 11 September terrorist attacks and the ensuing demonization of Islam, the backlash of the global economic crisis in 2008 and the tension resulting from the successive ampliations, the Arabic democratic impetus and the war in Libya with its impact on the Sahel and the Machrek, etc)

According to Mr Henry Marty-Gauquié, two factors have had a particularly aggravating effect on the tensions within the Mediterranean: firstly, the general conflict caused by globalisation ­- economic crisis, social tension, the incapacity of western nations to anticipate and manage the crises, etc.; secondly, the incapacity of the Arab world to manage its democratic transition and to ensure its economic recovery.

The regional objectives for cooperation and development therefore progressively disappeared from sight, giving way to the revival of a bilateral approach and differentiated relations between the EU and its Southern partners. This gave rise to the disappearance of the mutually advantageous interest in cooperating and achieving the regional integration objectives.

Mr Henry Marty-Gauquié stated that the European Union remains a major stakeholder, but is no longer a decision-maker in the Mediterranean. After an economic crisis that has lasted 8 years and has endangered European cohesion, the EU appears to be setting its priorities on improving its economic stability and on ensuring the survival of the European project, rather than on developing its exterior economic space (Neighbourhood policy).

According to Mr Henry Marty-Gauquié, the EU will only be in a position to regain its leadership position regarding its neighbouring countries of the South, in the mid or long term, once progress has been achieved in the following areas:

When such an initiative integrates the sovereign dimensions brought to light in recent years by the episodes of conflict, when security has been established regarding essential risks (food health energy and climate), the management of borders, migratory flows, and an equilibrium found among territories, generations and genders. This first requires the member States of the Union to define a new “social pact” (or a constitutional one) on the common management of these objectives. 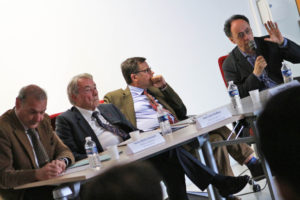 As a conclusion, Professor Philippe Gilles (Professor, Université de Toulon) summarised the debates and ended by considering the changing relations between the EU and the Southern countries in the light of contributions made by economic theory. He underlined the need to consider the redistribution of trade gains and the erosion of the partnership agreements that are no longer considered to be mutually advantageous. The Southern countries find it difficult to see what advantages they could draw from the agreements proposed by the EU, whereas the constraints relative to regulations and institutional reform are stringent and have immediate repercussions on production standards. The question of conflict between national sovereignty and regional agreements, which is also present in Europe with a rising number of Eurosceptic movements, is considerable in Southern countries faced with exacerbated security risks. Thus, before financial and commercial integration, which are vectors of uncertainty, can even be contemplated, the priority lies in consolidating domestic rules.

As a conclusion, the conference would suggest that the relations between the EU and its Southern neighbours are in dire need of a new momentum carried by a mid-term political vision (a project).

[1] Mediterranean society is organised around family relationships that guarantee solidarity in the face of adversity. Public redistribution policies are weak and include very little differentiation. These characteristics explain the vulnerability of Mediterranean societies to corruption and the underground economy.

* FEMISE participated in this event with the financial assistance of the European Union in the context of the EU-FEMISE project “Support to economic research, studies and dialogue of the Euro-Mediterranean Partnership”.