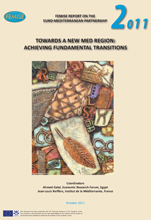 FEMISE has released its 2011 annual report on the Euro-Mediterranean Partnership and the status of the Southern Mediterranean countries. This year’s report is focused on the Mediterranean region and its fundamental transition towards a new era.

The first part of the report addresses these issues in 4 main chapters: (i) The first chapter aims to provide an overall panorama of the macro-economic status. More particularly, it seeks to characterise the current situation and to evaluate the short-term costs associated with the different internal events in the countries of the region, the consequences of the uncertainties concerning expectations and the effects of the slump in external demand in Europe and the United States; (ii) The second chapter examines in detail the collapse of the authoritarian bargain model which prevailed before the crisis (and which still prevails today in certain MPs) to ascertain what steps should be taken to transform it into a democratic model; (iii) The third chapter discusses the reasons why youth should be considered the main resource to be deployed. The aim here is to demonstrate the decisive importance of young people in the Mediterranean countries for another twenty years or so. At the end of this period, the Mediterranean countries will themselves be confronted with the problem of an ageing population and will have problems financing retirement pensions. To preserve long-term equilibrium it is therefore vital to satisfy the expectations of young people in the Mediterranean countries without delay; (iv) The fourth chapter deals with the additional trade potential which could be mobilised between the EU and its Mediterranean partners.

In the second part, the report addresses the current situation of the south Mediterranean economies concerned, country by country.

Chapter 1. The expected consequences of the revolutions

I. Short-term losses VS long-term gains: the rationale

III. How democracy and credibility are expected to generate considerable gains

Chapter 2. The Breakdown of the Authoritarian Bargain

I. For a long time, the authoritarian bargain reigned

IV. Factors that accelerated the breakdown

V. The future: from economics to politics and back

Chapter 3. Youth employment in the MPs

I. Young people, a real source of wealth for the MENA Countries provided they are mobilized

III. A difficult transition from education systems to the labor market

IV. The education/unemployment relationship: a source of major concern for the youth

V. How can the young graduates high unemployment rate be explained?

Chapter 4. Some new insights into trade potential between the EU and its MP’s

I. Selected stylized facts concerning trade between MPs and its EU: A comparative analysis

II. The trade potential between MPs and the EU: A comparative analysis