Femise > Articles > What growth potential for trade between the EU and its Mediterranean partners? 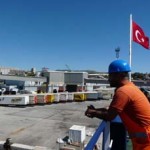 Removal of trade barriers is not enough to develop trade between the EU and its partners in the Southern Mediterranean. Other parameters such as the quality of the logistics system, non-tariff barriers, innovation, openness to foreign investment or good governance are factors to consider.

The statistics show that countries in the southern Mediterranean have an insignificant world exports despite a slight increase over the decade 2000/2009 from 1.8% to 2.9%. During this same period, exports from these countries to the EU rose from 2.7% to 3.5% is better but it remains low.

If the progressive abolition of customs barriers helps to develop trade between the European Union and its Mediterranean partners, are there any scope for increased trade?

“This is not because the level of trade is lower than the growth potential is important”, warns Nicolas Péridy, director of Laboratory of Applied Economics Development at the University of South Toulon-Var, he contributed to the work of FEMISE on this issue often debated.

Most of the classical analysis conducted to date have concluded that a real potential for growth in trade between the EU and its partners in the Southern Mediterranean, believing that their exports to Europe remain below average from 10 to 20%, depending on the country, that they might be.

“This is not our conclusion”, says Nicolas Péridy. “We have worked differently, by expanding our field of study to take into account other variables that the only tariff barriers which helps to explain these exchanges. It shows that the growth potential in the state, is limited but can be developed if we act to change these other variables.”

The government is committed

What are these variables? First the quality of infrastructure and logistics system. The countries of the southern Mediterranean show a lower efficiency compared to other logistics emerging, which is a real handicap. Their efforts should therefore aim to move closer to international standards.

Another sensible innovation. Undeveloped south of the Mediterranean, unlike other integrated regions such as ASEAN (Association of Peoples of the South-east), it limited to certain categories of export products available, oil products manufactured with low added value.

The work of economists Femise also show that migration between countries of the southern Mediterranean and the EU are also factors of growth in trade, as the level of foreign direct investment, which they are favored, can help change that.

Finally, governance is critical. Corruption and impediments to democracy raging south of the Mediterranean are all obstacles which limit the scope for trade. In this regard, the Arab spring opens up new perspectives.

Article by Christiane Navas, Econostrum. It belongs to a series of articles published in the context of the partnership between Econostrum and Femise for the year 2011. These articles also feed the “Grand Angle” part of the Econostrum Website. You can find this topic and all information at the following address: www.econostrum.info. Registration for the Econostrum newsletter is available here: http://www.econostrum.info/subscription/