Femise > Articles > When the Weather affects the economy 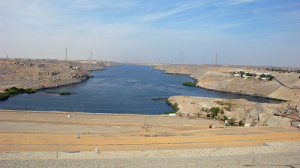 Regular flooding, heatwaves and droughts have an impact on farming and production. This will eventually cause investment to dry up and will have a major impact on consumption as commodity prices inevitably soar. Femise researchers have published a study (FEM34-23) measuring the effects of climate change in Egypt in 2050.

If no action is taken, climate change will reduce Egypt’s GDP by as much as 10% in that year. This shows just how important it is for the economy. Climate change is not just about rising temperatures and higher rainfall; increasingly extreme events must also be taken into account. Storms, heatwaves and floods have a devastating effect.

Sherman Robinson and Dirk Willenbockel, two experts working respectively in the US and the UK, joined together with Abeer Elshennawy, a professor at the American University in Cairo and coordinator of the Femise study (FEM34-23 ) entitled “Climate Change and Economic Growth: An Intertemporal General Equilibrium Analysis for Egypt”.

They endeavoured to predict climate change in Egypt by studying several scenarios.

Measures to ward off the effects of climate change

Temperatures rose by between 3°C and 3.5°C between 1960 and 1990, and they are expected to increase by another 2°C by 2050. The country’s tourist industry is likely to suffer from this, but many other sectors will also be affected. There could be significant damage to farming, which is particularly vulnerable to deviations in temperature and rainfall.

Egypt felt the full force of climate change during the heatwave of 2010. The country’s farms, which are concentrated in the Nile valley and delta, were hit hard, resulting in a sharp increase in prices. Agricultural productivity is a certain casualty of rising temperatures.

The experts also highlighted the impact of power cuts on production systems, and particularly on refrigeration systems.

This is something that could eventually put investors off. How can you envisage installing a steelworks, a cement works or a glassworks without a continuous power supply? The economists at Femise believe that rising electricity costs will have a knock-on effect on production costs.

As well as the impact on consumption and investment, we must also consider property depreciation, particularly in coastal areas, as a direct result of rising sea levels.
The Femise study recommends quickly implementing measures, such as making irrigation systems more efficient and providing better protection for coastal and plantation areas, to mitigate the impact of climate change.

These first few steps alone would enable Egypt to restrict its GDP loss in 2050 to 4%.