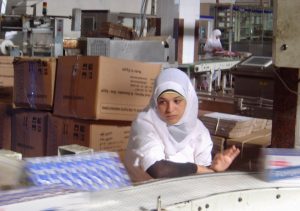 The question of the equality of men and women in the labor market is acute in North Africa and the Middle East, countries marked by the weight of culture and secular traditions. In a study just released by the Femise on the issue of discrimination at workplace and wage gaps, the economists examine the situation of women in Egypt and Jordan.

More affected by unemployment than men, Middle-Eastern women face difficulties of access to employment. Once immersed in active life, they are subject to discrimination at work that takes various forms. In addition to remuneration inequalities, there are notable differences, including those related to the structure and career paths. These aspects interact and generate multiple, complex inequalities with corollary exclusion. These findings have just been brought to light by the Femise researchers who focused their study on inequalities in Egypt and Jordan.

Entitled “The Feminization of Occupations and its Effect on the Gender Wage Gap in Southern Mediterranean Countries”, the FEM43-08 study was coordinated by Doaa Salman. Professor and Director of the Economics Department at the University of Modern Sciences and Arts of Egypt (MSA), with the collaboration of Mona Said, Professor and Director of the Department of Economics at the American University of Cairo (AUC) and Vassilis Monastiriodis, associate professor at London School of Economics (LSE).

​Barely a quarter of women are actively working in Egypt

At the equivalent level, employers recruit men for fear of repeated absences and maternity leave. With equal skills, women face great difficulty in progressing in the hierarchy.

In both countries, the participation of women in the labor market remains very low, “25% in Egypt and 20% in Jordan “, write the authors of the report, stating that this rate has increased since the 90s when only 15% of women worked. In addition, the gross wage gap has increased to 21.5% in 2012 in Egypt and 39.4% in Jordan. This wage penalty comes exclusively from factors external to the labor market. The study shows that in Egypt the pay gap could go up to 48% for the same job.In these countries, the public sector, characterized by a high number of civil servants, constitutes a significant advantage for women both in terms of employment and wages.

The two countries, at the bottom of the gender inequality index, have many similarities and are characterized by an overrepresentation of women in the informal economy, the agricultural sector and the administration. This feminization of professions tends to increase the pay gap with a perverse effect since it discourages them to apply. Discrimination, whose roots lie in “Marxist analysis of exploitation” and the segmentation of tasks, is also explained by the weight of cultural, religious and societal traditions.

Femise advocates “tackling cultural and societal barriers” and invites countries to develop policies” for greater participation of women in the labor market“, citing concrete examples such as the generalization of the use of childcare and the maintenance of wages during maternity leave.