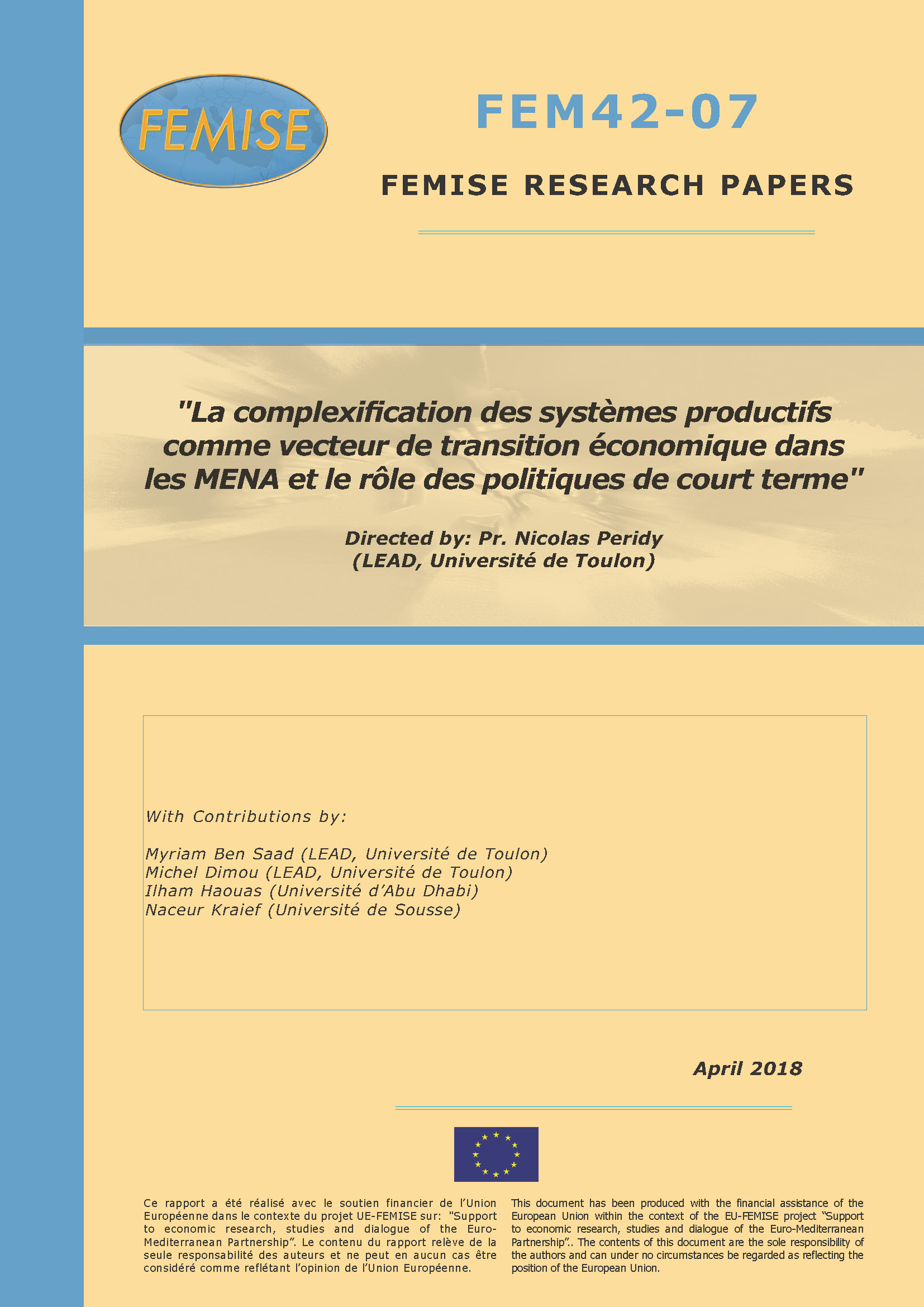 FEMISE is pleased to announce the publication of its research project FEM42-07, “The complexification of productive systems as a vector of economic transition in the MENA and the role of short-term policies”, coordinated by Pr. Nicolas Peridy (LEAD , University of Toulon).

Our work shows that the economic complexity of a country can be affected by the performance of its neighbors and then influenced by its own geographical position. However, this process may mask regional phenomena of divergence that must be related to the roles played by national and / or regional public policies, as well as the economic, structural and demographic dynamics (GDP / capita, education, innovation, natural resources, urbanization, …).

The main recommendations are :

These recommendations can be initiated and implemented quickly by public authorities which must send a strong signal to the economic actors in order to accelerate this process of sophistication of the Mediterranean economies, with the aim of promoting growth and employment, particularly qualified. 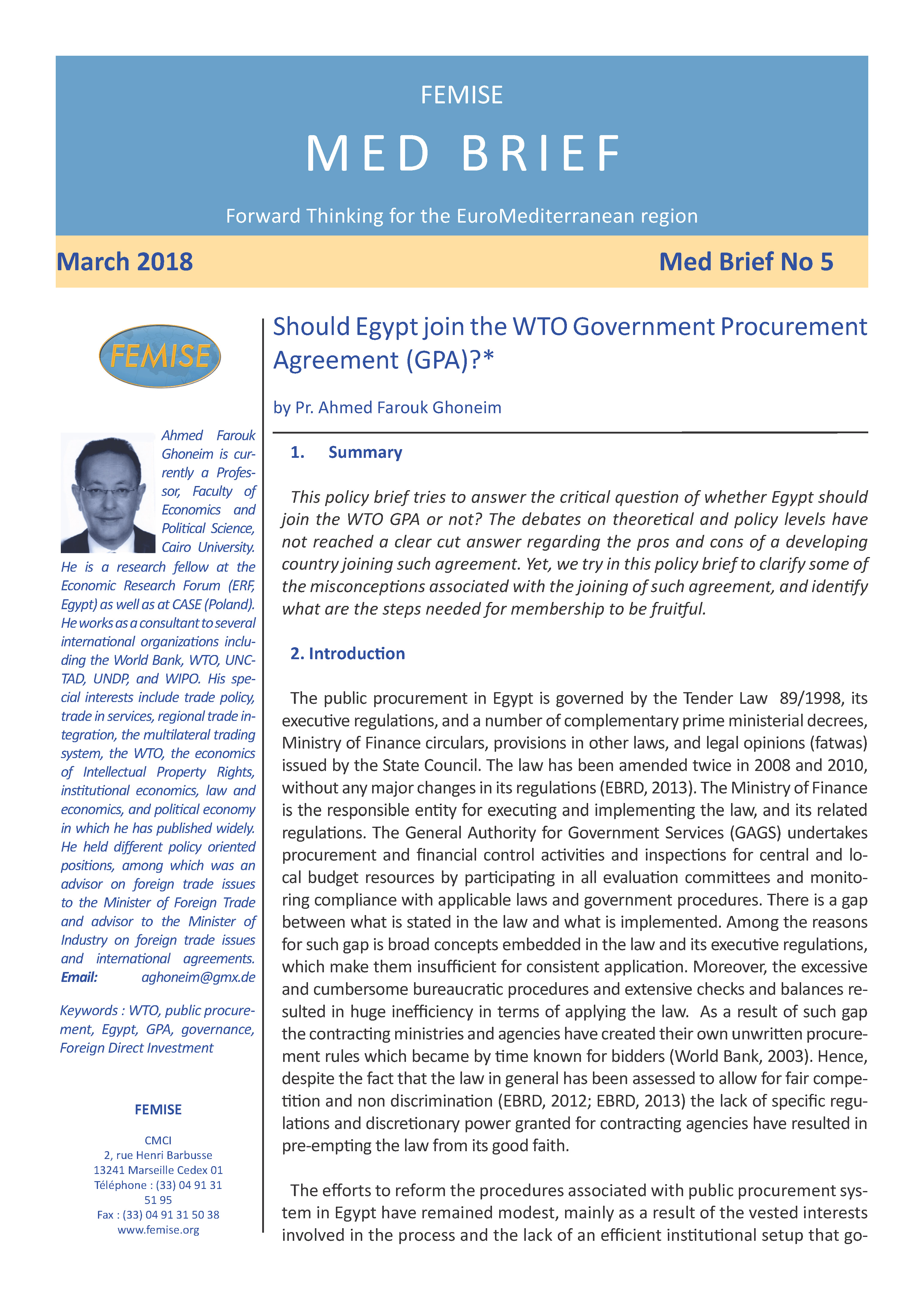 “This Policy Brief, by Ahmed Farouk Ghoneim (Professor of Economics, Faculty of Economics & Political Science, Cairo University), tries to answer the critical question of whether Egypt should join the WTO GPA? The debates on theoretical and policy levels have not reached a clear cut answer regarding the pros and cons of a developing country joining such an agreement. Yet, we try in this policy brief to clarify some of the misconceptions associated with the joining of such agreement, and identify what are the steps needed for membership to be fruitful”

Governance in Middle-Eastern and North African countries is a major factor in their businesses’ ability to trade and participate in the global economy. The quality of institutions correlates with the export performance of companies, as shown by the latest FEMISE report (FEM41-08). The governance in Middle-Eastern and North African countries is a major factor in their businesses’ ability to trade and participate in the global economy. ©DR

The latest FEMISE publication, “Corporate Performance in Transition: The Role of Business Constraints and Institutions in the South Mediterranean Region” (available here), is structured in three parts.
After analyzing the knowhow and constraints of companies located in the Middle East and North Africa, the report goes on to examine the case of Egyptian companies, looking at the obstacles impeding their performance.

The third part of the report, coordinated by economics professor Inmaculada Martínez-Zarzoso, underlines the importance of governance in the companies’ ability to export or import.As part of the ambitious study, the FEMISE economists looked at bilateral exports between 189 trading partners and 19 exporting countries between 1996 and 2013. It transpires that, while democracy and well-functioning institutions are a prerequisite, the business environment not only has an influence on productivity, but also has an effect on the performance of the economy as a whole. Both the trading environment and the institutional framework impact corporate performance and the country’s economic vitality.

The importance of consistent governance in facilitating trade

The study shows that, in the wake of the Arab Spring, new criteria came to the fore. Thus, invoicing and accounting are seen as determining factors in boosting exports.

The business world needs a stable environment, especially where property rights are concerned. Respect for the rule of law, fighting against corruption and an efficient administration boost business relations. Furthermore, two countries with similar governance will see a positive effect on their export levels.

“Similar regulations and the rule of law boost exports in the Middle East. Policies aimed at freeing up trade could therefore be targeted at trading partners with similar norms of governance,” the document states, adding that each of the six governance indicators has a positive impact on bilateral trade.

For more on this timely subject, please download the report available here.

Article produced in partnership with Econostrum. 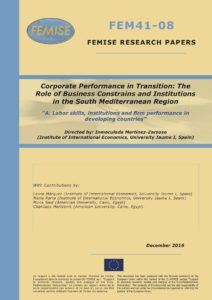