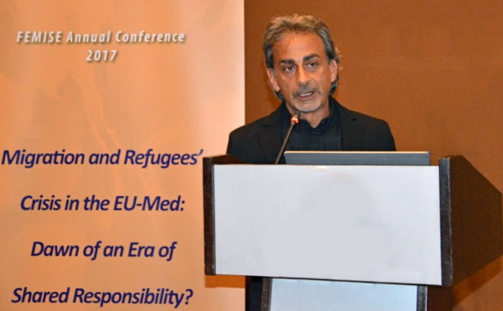 Professor of Economics at the American University of Beirut in Lebanon, Simon Neaime coordinated the latest Femise report on “Twin Deficits and the Sustainability of Macroeconomic Policies in Mediterranean Countries”. ©N.B.C

Professor of Economics at the American University of Beirut in Lebanon, Simon Neaime coordinated the latest Femise report on “Twin Deficits and the Sustainability of Macroeconomic Policies in Mediterranean Countries”. The report suggests a reduction of the public sphere and invites countries to rethink their fiscal and monetary policies. An analysis of the causes of a double phenomenon ensues : the public deficit and the balance of payments deficit.

The Femise report is entitled “ Twin Deficits and the Sustainability of Macroeconomic Policies in Selected European and Mediterranean Partner Countries: Post Financial and Debt Crises”. Which countries are affected by the twin deficits? :  Greece, Portugal, Ireland, Italy and Spain have accumulated budget deficits of 5 to 10% of GDP on average, resulting in a public debt exceeding 120 percent of GDP on average in 2016. The situation is almost similar in the Mediterranean where social, political and military tensions have aggravated an already depressed macroeconomic environment. While the trade balance seems to contribute to the budget deficit in the Mediterranean countries, the relationship seems to be reversed for European countries, where the fiscal balance seems to be the one influencing the current account.

The Femise report assesses the introduction of macroeconomic stabilization programs to propose new combinations of monetary and fiscal policies. Sustainable policies that lead to growth, development, and debt and budget reduction.Femise recommends better coordination of macroeconomic policies between EU countries and those on the southern shore of the Mediterranean. In concrete terms, what should countries of both shores do? :  European and Mediterranean governments will first have to reduce their spending but also the size of the public sector in favor of the private sector. They will also have to channel liquidity through loans and encourage investment in productive enterprises. Given the commercial dependence of the Mediterranean countries on the European Union and the fact that most Member States have implemented austerity policies, we consider that the export-decline in the Mediterranean countries has increased their budget deficit. We therefore call for better coordination of macroeconomic policies between the EU and these Southern Mediterranean partners.

You recommend a restriction of the public sectors’ perimeter and, at the same time, you encourage the same sector to play a central role in macroeconomic balances. Isn’t this a paradox? : We advocate for reducing the size of the public sector to the benefit of the private sector and for playing a central role in maintaining macroeconomic balances and debt reduction through economic policies. This is not paradoxical but complementary. Monetary policies will remain ineffective if private sector expectations are not met and if the banking sector remains in poor health, especially in the case of the Italian and Greek banks.

How can the trade balance be rebalanced? : A first solution would be for the Mediterranean countries to favor the transition from a fixed exchange rate regime to a flexible one, as Egypt has already done. The flexible exchange rate helps absorb external shocks and limits inflation. Egypt has been able to improve the effectiveness of its monetary policy to deal with external shocks through this strategic choice. Tunisia and Morocco also seem to be following this direction. Another option would be for European countries to consider lowering tariffs on some targeted products and move towards further integration with the MENA region. The Euro-Mediterranean trade agreements must be improved to make Mediterranean products more competitive in European markets

Interview by Nathalie Bureau du Colombier in partnership with Econostrum