The coronavirus has proved to be a serious threat not only to people’s health but also to economies and societies of all countries, regardless of their level of development. This crisis presents a real test to the resilience of the Southern and Eastern Mediterranean countries, as it came at a time when they were challenged to keep their economies growing, facing increasing unemployment and scarce resources. The way out of the crisis will greatly depend on how countries in the region prioritise their actions, and on how they integrate and cooperate with each other in key sectors. Following the success of the first round of “COVID-19 MED BRIEFS” launched by the Center for Mediterranean Integration (CMI) and FEMISE, the two institutions decided to join forces again and launch a second round. This series of Policy Briefs is intended to pave the way for more in-depth thematic analyses and recommendations. 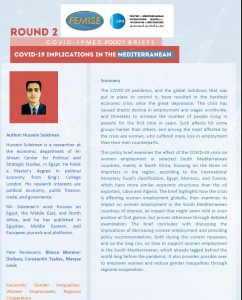 Summary :  The COVID-19 pandemic, and the global lockdown that was put in place to control it, have resulted in the harshest economic crisis since the great depression. The crisis has caused drastic decline in employment and wages worldwide, and threatens to increase the number of people living in poverty for the first time in years. Such effects hit some groups harder than others, and among the most affected by the crisis are women, who suffered more loss in employment than their men counterparts.

This policy brief examines the effect of the COVID-19 crisis on women employment in selected South Mediterranean countries, mainly in North Africa, focusing on the three oil importers in the region, according to the International Monetary Fund’s classification, Egypt, Morocco, and Tunisia, which have more similar economic structures than the oil exporters, Libya and Algeria. The brief highlights how the crisis is affecting women employment globally, then examines its impact on women employment in the South Mediterranean countries of interest, an impact that might seem mild or even positive at first glance, but proves otherwise through detailed examination. The brief concludes with discussing the implications of decreasing women employment and providing policy recommendations, both during the current recession, and on the long run, on how to support women employment in the South Mediterranean, which already lagged behind the world long before the pandemic. It also provides possible axes to empower women and reduce gender inequalities through regional cooperation.

This Policy Brief is produced as part of the series of Policy Briefs on « Responding to the Challenges of COVID-19 in the Mediterranean » that is undertaken in partnership between FEMISE and the Center for Mediterranean Integration (CMI).