Femise > Studies and research > Agriculture, services and migration > Winners and Losers in the Tourism and Hospitality Industry along the Transition Process 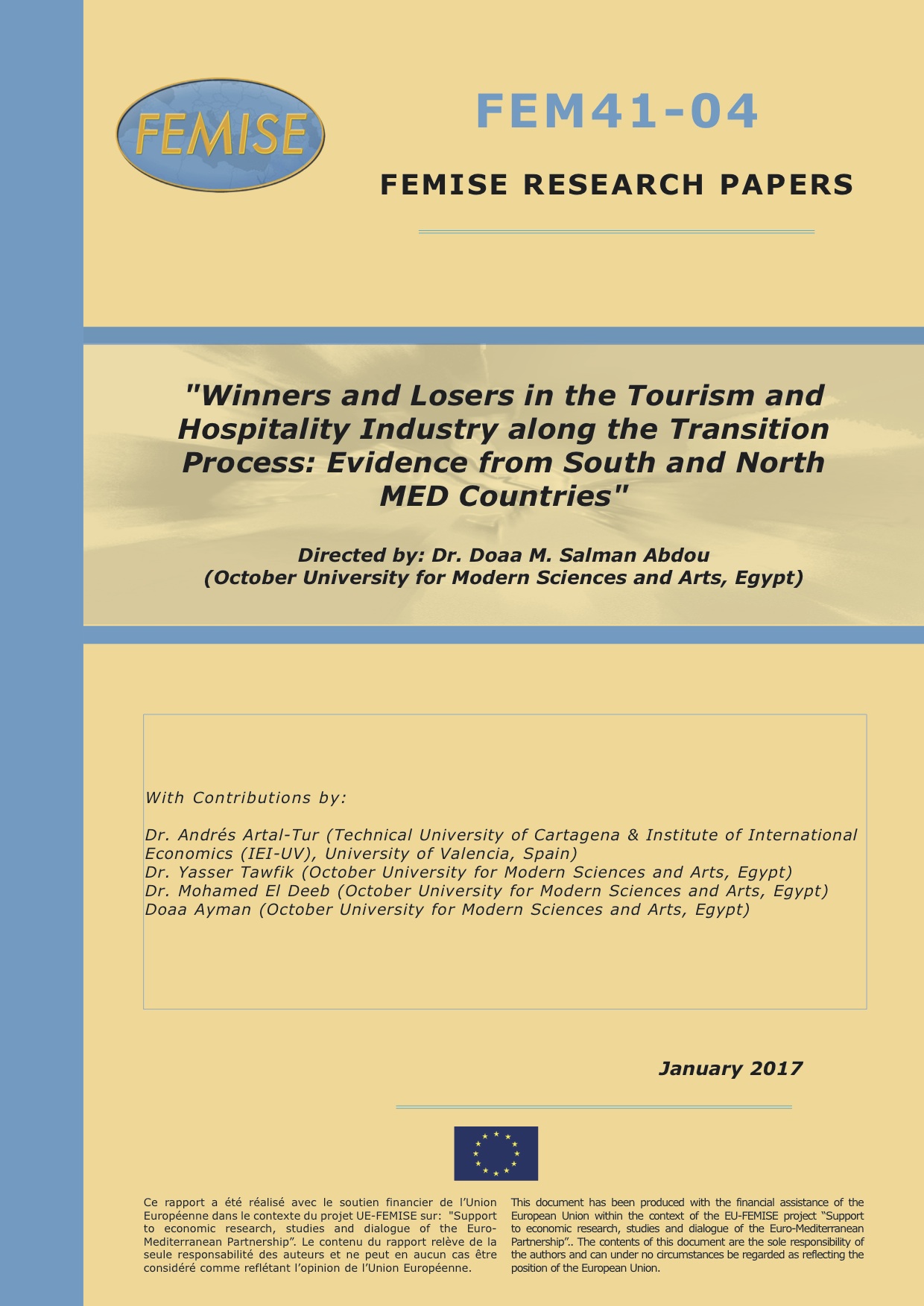 Along the present “Executive Summary” we synthesize the main findings of FEMISE Research Project FEM 41-04, on “Winners And Losers In The Tourism And Hospitality Industry Along The Transition Process: Evidence From South And North MED Countries”, corresponding to the FEMISE research program 2015/2016.

Tourism is the backbone for many Mediterranean (MED) countries, providing a pivotal source of foreign currencies, attracting investments, absorbing labour force and sharing in the countries development. Tourism is also a sensitive industry based on security and safety issues when attracting tourists from all over the world. In 2015, the Mediterranean region was the first world tourism destination with more than 250 million people in arrivals and 200,000 million dollar in receipts, due to the presence of the leading North shore destinations (France, Spain, Greece and Italy) and South-East shore countries (Egypt, Turkey and Tunisia) (UNWTO, 2016).

At their very beginning, in years 2010 and 2011, the media started to define the Arab Spring revolutions as peaceful protest movements that are requesting to correct imbalances, corruption, poor living standards and inequality. Later, the protests and violence increased, sending a message that these countries were unsafe places to be visited. The instability that spread among the countries in the Mediterranean reshaped the region as vulnerable and threatening, especially in the south shore after several attacks on foreign tourists. Subsequently, a decline occurred in tourist arrivals and revenues, especially in Egypt and Tunisia, affecting the countries’ national income. On the other hand, important destinations in the north shore of the MED region were receiving the bulk of relocations that cancelled their visits to south countries, with some countries such as Spain, Italy, France or Greece remarkably increasing the number of arrivals since the beginning of the Arab Spring.

In this context, the first chapter of the study focuses on reviewing the impact of the Arab Spring movements on the tourism sector for both shores of the Mediterranean, taking Egypt and Spain as reference case studies In the case of Egypt, we can see that the tourism sector has been negatively affected by the instability situation, with this country facing a severe decline in tourist arrivals, revenues, occupancy rates, level of employment, taxes collection and global investments. However, the country is now in the midst of a transition process, and the recovery of a stable situation and the promotion of the country as a safe tourist destination is the main objective for present times, in order to retrieve the necessary benefits coming from international tourism. In contrast, Spain was recording remarkable flows of international inbound tourism in these years. More than 12 million trips have been relocated by international tour-operators into the country since year 2011 according to official estimates (Exceltur), with the year 2015 showing an historical number of 69 million of international arrivals. In broader terms, the South European Mediterranean countries increased international tourist arrivals in more than 50 million people in years 2010-2015, while arrivals in traditional destinations in the North of Africa dropped from more than 7 million people since 2010, with Egypt losing more than 5 million tourists in these years and Tunisia doing it for more than 2.5 million entrances. After this introductory section, the following two chapters of the investigation have focused on how to limit the impact of the instability situation on the tourism and hospitality industry in the MED region. For the south shore region, Chapter 2 proposes a marketing mix model helping to reduce the impact of the crisis on the labour force and feeble management methods. The model is tested for the reference case of Egypt. For the north shore MED region, Chapter 3 reviews the main changes taken place in the profile and vacational behaviour of tourists visiting the region and, by means of an expenditure model, we test how these changes could be affecting the economic sustainability of the tourists sector for the future. This setting is tested for the case of Spain as benchmark destination in this area.

In more detail, the second chapter of the study focuses on designing a new marketing mix model to rescue the hospitality industry in the South region, providing evidence from Egypt after the Arab Spring. The chapter emphasizes the necessity of identifying the key constructs driving the paths of improvement, restructuring and development for the tourism and hospitality industry in times of transition. We divide the model into an internal environment, and an external environment context. Our aim is to provide managers with new analytic tools helping them to overcome the current challenges. In testing the model, empirical research focus on survey analysis made to a sample of 5 and 4 star hotels located in Great Cairo, Alexandria, Sharma El Sheikh, Hurghada, Luxor and Aswan in Egypt. The analysis was carried out by combining different statistical techniques including reliability intrinsic validity tests and logistic regression models. Relying on theoretical models and empirical results, we find out the following: the significant effects of feeble management performance characterizing hotels lie behind most of the labor layoffs. Crises management processes should be considered in this context as an alternative option of layoffs during the transition process.

Moreover, there are significant relationships between the occupancy rate during the transition process and the internal success factors of hotels represented by job oriented and customer oriented constructs. Levels of occupancy rates during the transition process became the key in the internal success factors of hotels, with the proposed marketing model being able to show the linkages between contemporary marketing mix, traditional marketing mix collaborative work achievements, and the rightsizing of cost optimization actions. These results emphasize the role of good management and marketing techniques for dealing with restrictions in times of transition in the hospitality industry at South countries.

Finally, the third chapter of the project investigates the impact of the boost in international arrivals in North MED countries since the beginning of the Arab Spring. It is interesting to note that in Spain, as well as in other north MED countries, the growth of international inbound tourism contrasted with an evident decline in domestic tourist flows since the beginning of the global financial crisis. This boom in international tourism in times of weak domestic demand undoubtedly helped the tourism industry to face its necessary reconversion path.

In the present analysis, this chapter employs survey data of more than 200,000 international tourists who were interviewed by the Spanish Institute of Tourism Studies (IET). The first part of the chapter focused on understanding the main changes taking place in the profile of tourists arriving since the beginning of the Arab Spring movements, and on the characteristics of their vacational stays. Main findings on the issue showed an increase in the presence of new groups of visitors, including tourists from northern Europe, Americas, and Asia in Spain, as well as a growing presence of other interesting segments of tourists, like females, young visitors with tertiary education, or travelling alone and with friends. New types of tourist behaviour have also emerged along these years, including a growing use of rent apartments, booking-in-advance customer preference and generalization of the Internet in tourism planning. Culture is being consolidated as a pivotal asset in the development of the European and Mediterranean tourism, while other interesting activities gaining place at destinations are those of tourism events (sports, cultural) and those closely linked to the idiosyncrasy of the Mediterranean region (gastronomy, nightlife). In the second part of the research we ran tourist expenditure models for four main destinations in Spain (Balearic and Canary Islands, Madrid and Catalonia) in order to identify the factors leading tourism spendings in the country and by destination. The most relevant factors leading expenditure in Spain appear to be those of country of origin, purpose of the visit, type of accommodation chosen, and level of income of visitors.

Combining the results of both sections, we can improve our knowledge on how changes in profiles of tourists would be affecting the economic sustainability of destinations in the near future. In this way, some important results emerge from the investigation. The first one relates to the growing revenues linked to new groups of tourists significantly increasing their presence in Spain through these years. These include international visitors coming from non-traditional origin countries in north of Europe, North America, Asia and the Middle East, all showing much higher levels of expenditure in regards to traditional EU visitors. Other collectives showing higher presence in Spain and increasing average spending according to expenditure equations are those of mid-age visitors, those with mid income levels, first-time visitors, and tertiary educated ones. Young visitors at urban destinations (Madrid and Catalonia), people travelling alone and with friends, all have been increasing their presence in the country in these years and help to increase the level of expenditure in Spain too. Other trends identified in the sample would be also help to increase spending in the future, including people engaged in cultural and food-related activities that has been significantly growing along recent years. Growth of all these activities enlarges the cultural and social dimension of destinations, also increasing economic revenues, reinforcing in this way the destination competitiveness. In general, positive outcomes for economic sustainability and competitiveness appear to be identified in Spain along these years, some of this coming in connection with relocation effects derived from the Arab Spring.

However, notable challenges have been also raised by results of the investigation. One of the most important is that referring to the capacity of destinations to increase spending of traditional EU visitors, given that they continue to represent around half of the global international tourism demand in Spain. Given that North African destinations show higher price competitiveness, pressures for downsizing of tourism prices in Spain have resulted in lower average trip spendings at some destinations. Such an issue points to the need of attracting more high-income tourists from overseas, i.e. Chinese visitors, as they constitute a desired target, but have slightly reduced their presence in Spain during these years. These two key points show the necessity of continuing with the reconversion of the Spanish tourism model, mainly for seaside mature destinations.

Summing up from all chapters, main findings of the Research Project FEM 41-04 showed that the tourism industry in the MED region has been facing a challenging situation, given the instability promoted by recent events, including the Arab Spring and the war in Syria. The project provides instruments to improve feeble management of hospitality industry in South countries, and a number of guidelines directed to increase the average tourist expenditure at north MED destinations for improving their economic sustainability. However, none of this would make no sense without an urgent determination of the EU institutions for achieving peace and stability in the MED region, this being a central policy prescription from the project. The focus of Neighboring Policies on developing cooperation and peace instruments would result in benefits for all the people in the region, as instability is a process that spreads through borders, whether you belong to the North or the South of the MED region.

“Winners and Losers in the Tourism and Hospitality Industry along the Transition Process: Evidence from South and North MED Countries“