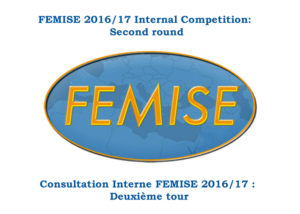 FEMISE is pleased to announce the launch of its 2016 Internal Competition.

I. INTRODUCTION AND THEME OF THE CALL

Members of the FEMISE network who participated as affiliates of FEMISE in the European Commission Call[1] are invited to submit research proposals under the theme of:

Managing the Transition in the South-Med Countries.

The deadline for the submission is on the 14th of June 2016.

Winning proposals will meet the criteria of having a real value added (generating fresh knowledge), using rigorous and sound methodology, and having the potential of offering policy recommendations to countries in transition in the short run. In general, submitted proposals should reflect a real evolution compared to the content of past FEMISE research. New proposals should answer new questions, or deepen, extend and enrich questions that have been addressed. In the latter case, the proposal should explicitly state its value added compared to prior FEMISE work.

This second call for internal competition is one of three complementary rounds:

These rounds of competitions come at a time when countries in the south are facing transition challenges now in addition to the structural problems they inherited from before. Failure to achieve inclusive economic growth in the past is now compounded by rising budget deficits and public debt, balance of payment deficits and deciding international reserves as well as unemployment and inflation. Political uncertainty deprived these countries from capital inflows and tourism on the one hand, and caused sluggish economic growth and rising unemployment, increasing the demands for redistributive policies. All of these challenges made the transition all the more difficult. The need for well-conceived and founded policy advice is now more critical than ever before. Hence this call for proposals.

Deadline for submissions of proposals: 14th of June 2016

Selection and Notification of acceptance: 8 July 2016

The dossier of the research proposals should include the following documents:

(1) The research proposal should not exceed 5 pages and should include the following:

(3) The CVs of the members of the research consortium (standard forms available to download here, if needed)

The dossier of the research proposal of the consortium can be sent to FEMISE bureau by email, fax or courier not later than 14th of June 2016. Any applications received after this date will not be considered.

(1) Only Affiliates and Co-applicants members to the FEMISE-EU Contract on “Support to dialogues, political and economic research and studies of the Euro-Mediterranean Partnership” can be funded in this call (Please click here to download the list of those Affiliates to find out if your institute is eligible).

(3) Composition of the Consortium:

The overall budget dedicated to all the selected proposals in this second round of the internal competition will be approximate €80,000. Teams are encouraged to produce more than one research paper from their project. The funding will ONLY cover the honorarium of the elligible researchers that will be working on the selected proposals.

The requested amount in the proposal needs to match the number of research papers produced and their quality, and will be part of the evaluation. The Selection committee reserves the right to modify the requested amount.

Following the initial screening for eligibility, proposals will go through the following evaluation process:

I. Evaluation: The FEMISE Evaluation Committee will perform the technical evaluation of the proposals, addressing the following criteria:

II. Selection: Based on this technical evaluation, a selection process will take place for the proposals that will receive funding, while taking into account issues of geographical coverage and priorities to the region.

The decision of the selection committee will be one of the following:

Team leader of all proposals will be informed of the decision of the selection committee. For the accepted proposals, the bureau will send the necessary contractual documents, general conditions and forms.

The output of the research should be made in terms of one ore more research report of an average of 30-40 pages (excluding Annexes), ensuring a good focused analysis and increasing publications’ potentials in scientific journals, articles and policy briefs.

(1) Drafts of the submitted research reports will go through an ex-post evaluation process (‘Peer Review’).

(2) Dissemination plans (other than the channels provided by FEMISE) are very much encouraged but needs to be discussed with FEMISE to ensure proper acknowledgements are made to the support of FEMISE and the European commission.

[1] The title of the Contract is « Support to dialogues, political and economic research and studies of the Euro-Mediterranean Partnership » launched in March 2015.