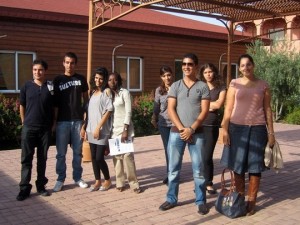 In Morocco and Tunisia, more and more young people are continuing their education at university; 60% of people joining the labour market have completed a university degree. Yet it this sector of the population that has the highest rate of unemployment.

“Study and it will be easier for you to find a job!” Who hasn’t heard that refrain, so often repeated by parents to encourage their children to attend university, a guarantee of certainty for the future. A false promise, at least in Morocco and Tunisia, where each year some 60,000 student are awarded a degree and experience great difficulties finding employment.

Each year, the Tunisian economy creates “between 70,000 and 80,000 jobs. In Tunisia, the gap between the supply of and demand for labour with university qualifications was close to 30,000 in 2007. In both countries, unemployment among young graduates is above 30%”, according to a recent FEMISE study (FEM33-24) by IACE ’s Fayçal Lakhoua.

These young people constitute the section of the population most likely to experience long-term unemployment (between two and five years) (*).

The current structure of the Tunisian and Moroccan economies does not allow for the large-scale recruitment of young university graduates. The productive sector of both countries relies on the use of specialist but unqualified labour. In 2008, the proportion of workers with no qualifications was 68.2% in Morocco, and 46.7 % in Tunisia.

Nevertheless, in recent years the proportion of the economically active population with university degrees has risen. “In Morocco, graduates with higher level qualifications secured more than a fifth (22%) of new jobs created each year on average between 2000 and 2008(…). In Tunisia, 36,000 jobs were created in 2008”.

Employability differs according to the level of study attained. In recent years, the rate of employment among holders of masters’ degrees and highly-qualified technicians has risen considerably. Engineers are 2.4 times more likely to secure employment than technicians, who remain the graduates that experience most difficulty securing employment.

Architects, engineers and doctors are much more successful securing employment. On the other hand, long-term unemployment is more prevalent among higher education graduates.

Unemployment mainly affects young people and women; they are more likely to undertake university studies, and often choose areas of study where prospects are fewer. “Men are 1.75 times more likely to find employment than women”.

Being single and mobile increases one´s chances of finding employment. The family patterns and geographical location of those seeking employment are also key factors.