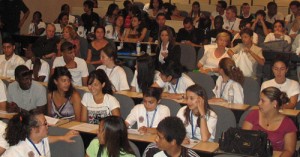 Better-trained, recent migrants enrich their countries of origin but not enough to compensate for the losses caused by their departure. They contribute positively through remittances and by giving hope to those looking to develop their skills. However, only their return could change this situation .

Over the last three decades, the proportion of migrants in the population of industrialised countries has doubled and the volume of people’s remittances now exceeds international development assistance. There is an increasing number of highly skilled people among these migrants. Does the brain drain from poor countries to richer countries only have negative effects? Studies carried out to date in different parts of the world have led to conclusions that are often contradictory. What’s the situation in the Maghreb, and more particularly, in Tunisia? A FEMISE report tries to answer this question (FEM33-16). The issue is important because despite increasingly restrictive policies in terms of receiving emigrant workers, the exodus continues.

More than a million Tunisians, or one tenth of the population, live and work abroad, especially in Europe, half of them in France. “Every year around 25,000 Tunisians leave their country because of structural unemployment which prevents them from finding work” says Mongi Boughzala, Professor of Economics and Management at Tunis University.

The unemployment rate in Tunisia reached 14% in 2010 (18% in 2011 with the decline in business because of the Arab Spring). It is even higher for younger people, over 30%, sometimes even 40% in some areas. Graduates are not spared, in 2008, 21.6% of them had not found employment. 80% of Tunisian emigrants may have no training, but among new migrants, the proportion of the better educated is increasing. Between 2003 and 2008, the number of Tunisian students in Europe doubled, and the percentage of those staying to work is even higher, especially as these young people are extremely bright.

Despite this brain drain, “does human capital accumulation benefit the country and does it contribute to growth? There are undeniable positive elements; more qualified, better trained young people and increasing relocation represent 11% of Tunisia’s foreign earnings – but if you think of it in terms of net income, it doesn’t add up, the losses are greater than the gains” is the only conclusion Mongi Boughzala came to from data he analysed.

“There can only be a net benefit when qualified migrants decide to come back to their country of origin”, suggests the economist. This is the case for Tunisia, Morocco, and Algeria. However, the more skills these migrants have, the greater their degree of integration in the host country and the more settled they are, the less likely they are to return. Will the Arab Spring change anything? “There are still many obstacles to overcome, it will take time”, Mongi Boughzala cautiously warns. For that to happen, there would need to be employment opportunities in their own country that do not exist at the moment.

Article by Christiane Navas, Econostrum. It belongs to a series of articles published in the context of the partnership between Econostrum and Femise for the year 2011. These articles also feed the “Grand Angle” part of the Econostrum Website. You can find this topic and all information at the following address: www.econostrum.info