Femise > Articles > Who benefits from growth in the Middle East and Maghreb? 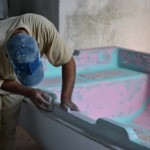 It is in labour markets in the Middle East and countries of the Maghreb that researchers from the Euro-Mediterranean Forum of Economic Institutes (FEMISE) have identified the most glaring inequalities. According to economists, governments must initiate reform guided by objectives of inclusive growth.
The relationship between growth and the reduction of inequality is not a new theme. However, Femise economists have completed an in-depth analysis of this interrelation in countries of the Maghreb and Middle East, in light of the global economic crisis and the Arab Spring, in a report entitled “Inclusive Growth in Mena: Employment and Poverty Dimensions in a comparative context”.
According to the FEM35-16 report, coordinated by Hassan Hakimian from the London Middle East Institute and School of Oriental & African Studies, countries of the Maghreb and Middle East have seen a rise in their GDP from 4 to 5% between 2000 and 2010.
This growth has generated an increase in life-expectancy, better access to drinking water and improvements in health and education. Nevertheless, in the light of uprisings in Arab countries, the authors show that there has been a focus on growth to the detriment of other indicators, leading to large-scale movements.

According to the comparative study, which is based on 13 criteria (health, growth, demographics, education, gender, occupation), inclusive growth in these countries is higher than in African countries and lower than in Asian countries. The report underlines the disparities within countries in the Middle East with major inequalities reported in Iran and Syria. Conversely, economists report a significant reduction in inequalities in Yemen, Lebanon, Turkey and Israel.
The first part of the report offers an analysis of the development of thought on the relationship between growth and equity. The labour market creates the greatest inequalities. Reforms can be brought about in order to reduce the gaps.
The second part of the report presents a detailed case study of Egypt, in particular on the role of SMEs and VSBs (very small businesses). The shadow economy remains dominant here. “However, legitimate businesses have the best opportunities for market interaction and of widening their client base in the public and private sectors through sub-contracting and, as a result, increasing their capacity to introduce better technologies and increase their productivity”, explains the Femise report. The report invites governments to propose measures which will encourage SMEs and VSBs to become more legitimate and to obtain financing from banks. When the SME grows and prospers, it has a positive influence on household income.
Photo : Growth in Maghreb and Middle East crountries has generated an increase in life-expectancy. (Photo F.Dubessy)– Article by Nathalie Bureau du Colombier, Econostrum. www.econostrum.info.Registration for the Econostrum newsletter:http://www.econostrum.info/subscription/