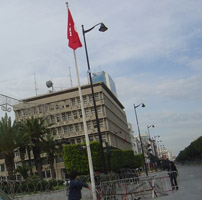 A strong message was sent out at the G8 summit which took place in Deauville on 26-27 May 2011. At the summit, the world’s eight most industrialised countries decided to lend their support to the move towards democratisation that was started at the beginning of the year by Tunisia and Egypt. On the agenda: 40 billion dollars in assistance over three years.

The heads of state of the world’s eight largest powers will provide their financial contribution to support Egypt and Tunisia on their path towards an irreversible process of democratic reform and economic measures.

Overall assistance of 40 billion dollars will sustain the ‘Arab spring’ in 2011-2013, with 20 billion in the form of multilateral assistance and 20 billion as bilateral assistance. The purpose of this “sustainable partnership” is to “support democratic reforms and meet aspirations for freedom and employment, in particular those of women and the young”, according to the terms of the final declaration adopted in Deauville.

This support for the transition of these two countries will be provided in the form of direct assistance from the G8 as loans from large institutions. The World Bank and the European Investment Bank should contribute to the recovery of these two countries. The share granted to each country will be known in a few days’ time, at the meeting of ministers of finance and foreign affairs to be held in Brussels in July.

“While revolution does not have a price, it does have a cost”

Thus, the appeal launched on the eve of the G8 by a group of economists met with a favourable response. In an open letter published in Le Monde, these economists had called for the adoption by the G8 of a “plan worth 20 to 30 billion dollars over five to ten years to invest in the opening-up of Tunisia. Indeed, the development of transport, technological infrastructure, industrial clusters and manufacturers are in absolute priorities in order to be able to create the SME fabric that deprived areas so desperately need”.

Of the seven measures recommended, the economists are in favour in particular of the creation of a “financial institution specific to the region, since Tunisia and Egypt will probably be followed by several other countries” and the introduction of “mechanisms that guarantee better access to knowledge and encourage exchanges between young people across the Mediterranean and beyond”. According to these economists, Tunisia, due to its small size, could serve as the “perfect laboratory for democracy” in Arab countries.

“The plan we recommend would cost no more than 2 to 3% of the cost of German reunification, and less than the cost of the war in Iraq (…).While revolution does not have a price, it does have a cost”.

According to Edmund Phelps, winner of the Nobel Prize in Economics, two essential measures must be adopted before economic reforms can begin: “The first is to end the political control of the business sector by a privileged caste in society (…); the second is to eliminate the bureaucratic control of self-employment through licences and other obstacles”.