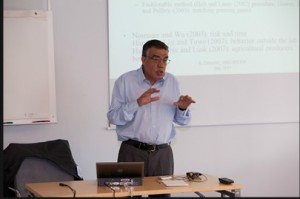 Contrary to popular belief, the migration of doctors from the Middle East and North Africa to Europe not only benefits the host country. Source countries also benefit from these departures. Strengthening North-South relations in the fields of education and medical research would reach a win-win scheme.

In the wake of the report of the World Health Organization 2006, Femise just published a report on the emigration of doctors from the Middle East and North Africa to Europe. Entitled ” What can we learn from the migration of medical doctors in the European Union: The case of economies of Central and Eastern, Middle East and North Africa? “the research report Book a new approach to North-South relations, laying the foundation for cooperation based on economic and social policy (see FEM34-07 on the site FEMISE). On the one hand, an aging Europe in search of doctors especially in rural and other doctors trained in the Middle East and North Africa who aspire to a better life. Developed countries are not the only ones to benefit from the medical brain drain. This mixing can produce a leverage effect on the educational system of the source countries.

A new era, relations between the EU and MENA countries are redesigned with a strengthening of cooperation

” The new economics of migration develops an approach in which the departure of skilled workers is not systematically generating brain drain. This means both that education is also appreciated and that doctors once in Europe have the opportunity to consider joining in a hospital or medical school of the South, creating a circular mobility. In parallel, Western physicians may wish to visit a few months in the South and return to Europe. These movements help to improve and Research. This question is insufficiently developed in the bilateral agreements with Europe , “says Ahmed Driouchi, Professor of Economics at Al Akhawayn University in Morocco and author of the report FEMISE. The Mediterranean is not a closed border, particularly in the field of medicine. The World Trade Organization promotes international trade in services including in the health field. ” A new era, relations between the EU and MENA countries are redesigned with a stronger cooperation between countries, between hospitals , “said Ahmed Driouchi. Collaboration can be done through publications. European countries also benefit from the export of their technology, their expertise and cooperation with foreign institutions. Trade flows will be created. ” The country of origin and destination have a deficit in doctors, but the market is open. If they want to convince doctors to practice in their home country, the South will at any cost increase wages and benefits and establish a real political attractiveness. It also requires improving the general conditions ie a true democracy and improved living conditions , “said Professor Ahmed Driouchi.