Femise > Articles > Why do doctors of the Middle East, North Africa and Eastern Europe migrate to Europe? 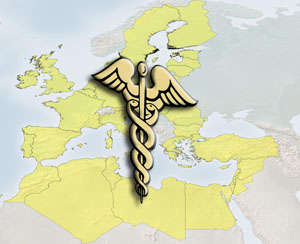 Syrians, Lebanese, Moroccans, Romanians … Who are these doctors who decided to pack up and travel to practice in Europe? What are their motivations? How can countries cope with this brain drain can they take advantage of this expatriation?  FEMISE provides answers to these questions in a research report that has just been published on the site FEMISE (FEM34-07).

The lure of a better life, satisfactory living conditions. A good salary, a well-developed education system, proximity to the country of origin … there are many factors that motivate doctors from the Middle East, the Maghreb Region and Eastern Europe to practice medicine in Europe. “Applicants are initially attracted by the relative advantages offered by the countries of the European Union. Better earnings allow them to live better and more comfortable lives. One must also consider the non-monetary benefits, the opportunity to grow professionally and build a career”, stresses Driouchi Ahmed, Professor of Economics at Al Akhawayn University, Ifrane, Morocco, and author of the FEMISE report. Entitled “What do we learn from the new economy of emigration of medical doctors to the EU: the case of Central and Eastern Europe, the Middle East and North Africa, “the study points to a two-tier system of migration.

The doctors from the Middle East and the Maghreb area do not often benefit from a fair and equivalent system. On arrival in Europe they might occupy junior positions while waiting to obtain equivalences of their certificates and have to go through  admission tests. Entries from Eastern European Countries into the European Union between 2002 and 2007 have increased the  scope for mobility ensuring the transferability of the skills of health professionals. This recognition of the qualifications of doctors, dentists, nurses and other health professionals encouraged emigration.

Romanian doctors are settling in most of the regions of France

It is for this reason that Romanian doctors are Settling in most of the regions of France. Very often doctors from the French-speaking countries opt for France or Belgium. Their English-speaking counterparts are more attracted to the United Kingdom. After a short period their  intellectual abilities  allow them to integrate.

The emigration rates of doctors are very high in Lebanon (19.6%) and Syria (17.5%). They are in Jordan as high as 9.9%, 7.1% in Algeria, in Morocco 6.6%, and 5.6% in Egypt. Morocco has in fact been the subject of in-depth study. Over the  400 pages of the study the FEMISE Researchers explain that there is a migration threshold for each country which should not be exceeded to avoid the pitfall of a brain drain.

” We have questioned Moroccan doctors who decided to remain in their Country.  The study confirms behavioural variables. Everything depends on the personal circumstances of individuals and on their strategy. The empirical model shows the relative advantages of the destination Countries “, concludes Professor Ahmed Driouchi.

Article by Nathalie Bureau du Colombier, Econostrum. It belongs to a series of articles published in the context of the partnership between Econostrum and Femise for the year 2012. These articles also feed the “Grand Angle” part of the Econostrum Website. You can find this topic and all information at the following address: www.econostrum.info. Registration for the Econostrum newsletter is available here: http://www.econostrum.info/subscription/