Femise > Articles > Making the most of trade liberalization 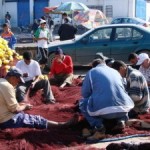 From the production of tobacco to the sale of fruit juices and fishing, these are just some potentially high-performance sectors for the Maghreb region and the Middle East, according to a recent study led by members of the Forum Euroméditerranéen des Instituts de Sciences économiques (FEMISE).(FEM35-03)

The liberalization of trade has led to a drop in food production in the Maghreb and Middle East, a trend the respective governments have been unable to reverse.

Meanwhile, some niche markets have been spared by European consumers. Maybe this is due to the European Union fishing quotas? Exports have never been higher and the geographic proximity of the South Mediterranean countries is an element worth developing.

The future is bright for the fish-farming industry. Fish are considered an upmarket product and are expensive. According to a Femise report FEM35-03 published in October 2013, for professors Selim Cagatay and Bernd Lucke “Government policy should aim at supporting the production and export of quality fish products. Processed seafood produce, such as frozen or canned fish, have a major development potential”.

This theory of comparative advantage, or specificity rule, also works for the production of tobacco and alcohol. Indeed, the tightening of European health legislation paves the way for growth opportunities in both Western and Eastern Europe. The authors of the article underline notably the potential for energy drinks and high-quality fruit juices.

For the authors of the FEM35-03 report International Trade and Sectoral Specialization: An assessment of the major trade areas: “Just as for seafood products, it is important to improve the quality of the packaging, marketing and distribution of the drinks”.

Trade liberalization occurred at the same time as the decline of entire areas of the economy. The chemical industry has been extremely hard hit and a great number of jobs lost. Governments need to draw up labour market policies that focus on training these people for other industrial sectors namely the buoyant metallurgical industry.

For growth sectors, it is vital to encourage start-ups by facilitating access to microcredit for example. Such policies have been implemented to benefit from the development of certain sectors such as the production of metal or rubber.

Due to their reputation for producing average quality products, the countries of the Maghreb need to concentrate on this by, for example, taking advantage of the “tax incentives for purchasing quality equipment and by focusing on training” indicates the report. Comparative advantages, as a factor of country attractiveness, help attract direct foreign investment.