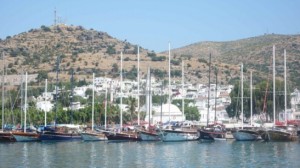 A few more degrees are enough to significantly alter the ecosystem by causing an increase in sea levels, land salinisation and repeated fires. It is a threat to tourism and agriculture, making the price of raw materials go through the roof. According to FEMISE, North African and Middle Eastern countries are particularly vulnerable and their economies could be weakened.

“The economies of North Africa and the Middle East will be affected by climate change. Our preliminary estimates indicate that a 1ºC increase in temperature causes a decrease in the per capita GDP of about 8% on average, with a range from -17% for Egypt to 0% for Turkey, Tunisia and some Mashreq countries. This decrease could even reach 14% if we do not introduce control measures to adapt to climate change”, according FEMISE, which has just published a report (FEM34-03 ), on the economic cost of climate change in the Middle East and North Africa.

The first signs of global warming appeared in the 70s with an acceleration of the phenomenon in the 2000s. Declining water resources, land degradation and a rise in sea levels of a few centimetres are all direct consequences of rising temperatures. “In urban areas, temperature increases of 1 to 3º C could expose between 6 and 25 million people to the risk of coastal flooding”, according to Nicolas Péridy from the University of Toulon-Var and Ahmed Ghoneim from Cairo University, the authors of this Femise study.

The water deficit could affect 80 to 100 million people

Ecosystems could also undergo changes. “These impacts are likely to affect economic activities with major effects on agriculture and tourism, following the significant drop in crop yields and increased salination of the land due to erosion and soil pollution by salt”, according to FEMISE.

The joint study on the northern and southern shores of the Mediterranean predicts an increase of 2°C within 15 to 20 years and between 4 and 6.5°C by the end of the 21st century.

Some countries have already evaluated these changes and are developing actions plans with the support of the European Commission and the World Bank.

“In terms of water management, many adaptation measures can be implemented through rational use of water, based on new pricing systems and recycling”. Finally, the authors of the FEMISE report recommend that, “measures related to new supply sources, such as desalination, should be considered”.

Just a drop in the ocean? These actions, which are considered insufficient, require large-scale implementation. Countries must boost structural changes and coordinate their environmental policies.

Article by Nathalie Bureau du Colombier, Econostrum. It belongs to a series of articles published in the context of the partnership between Econostrum and Femise for the year 2011. These articles also feed the “Grand Angle” part of the Econostrum Website. You can find this topic and all information at the following address: www.econostrum.info