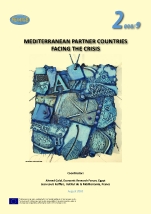 To address these issues, this report will assess in a first part, the crisis from a general perspective, following three chapters: (i) The first chapter aims to determine how the international crisis is going to affect the Mediterranean countries by focusing on the unprecedented aspects of the processes; (ii) The second chapter will detail the system of interdependence linking the Mediterranean countries with the rest of the world, especially Europe via trade of goods and services, direct investment and transfers; (iii) The third chapter is devoted to give an overview of the current social policies set up in the Mediterranean countries, which will play a decisive role in a context where the MPC population is already struggling with unemployment and under-employment.

In the second part, the report addresses  the current situation of the south Mediterranean economies concerned, country by country.

Download the English version of the Report (210 pages – 5 Mo)

An inescapable crisis
Part one – General overview: MPCs faced with the world crisis
Chapter I: The international crisis and its repercussions in MPCs
I. Tools for understanding an unprecedented crisis
II. The crisis in MPCs: the financial impact is today marginal but the real impact poses more of a threat
III. A much more dangerous crisis in the real sphere
IV. A macroeconomic balance under tight pressure
V. The beginnings of answers in a context of uncertainties
Chapter II. An essential requirement: consolidation of the regional interdependence system
I. Une ouverture qui s’est accélérée mais avec des fragilités
1. Greater opening to world trade of goods ending in a recurrent deficit
2. Commercial positions in the trade of goods on an underlying downward trend
3. Deterioration accelerated by the crisis and affecting new specialisations
4. Substantial international engagement in services
5. Lessons and stakes of a globalisation process begun 20 years ago
II. Regional allegiance: what dynamics and what protection?
1. A multiplication of regional level trade agreements and a growing de facto
commitment towards the rest of the world
2. The weakness of intra MPC trade is a sign of large development potential
3. A sizeable evolution in sectoral specialisations
4. Understanding the position of MPCs on external markets
5. Specialisation and contribution to the trade balance
6. The enhancement of positions on external markets in terms of specialisations
III. Regional orientation of FDI
1. The acceleration of FDI in the second half of the 2000s
2. A dependence on European and Gulf State flows
3. The economic consequences of this flow of direct investment
4. A post-crisis which requires more attractiveness from the MPCs
5. Conclusions
Chapter III. Social cover in the Mediterranean
I. The social services offer in the MPCs
1. Inventory of social protection systems in the Mediterranean
2. Operating principles: structural limits and questions linked to the context of the crisis
II. The results obtained by the current systems of protection
1. Considerable progress of the healthcare state, but still a marked gap with Europe
2. Varied effectiveness of social policies in the reduction of poverty
3. Evolution of inequalities
III. Leads for recommendations for social policies in a context of crisis
1. Reform of the health sector
2. The strengthening of Social Protection
3. Promote employment and participation in the formal job market and fight unemployment
4. The reduction or elimination of price subsidies and the adoption of alternative regimes
5. The need to find an alternative methodology for measuring well-being
6. The need for pluriannual budgetary programming for optimal visibility of strategic choices
IV. In conclusion
Notes
Bibliography
Part two – Detailed situation in MPCs : country sheets
Algérie