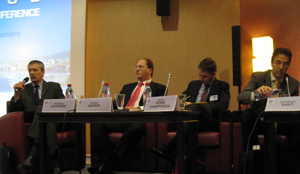 One year after the beginning of the Arab Spring, members of the FEMISE met in Marseille for their annual conference, on 15th and 16th December 2011. The economists firstly maintained that the awakening of the people in the region was based on a quest for freedom and dignity: “Many people thought that the economic situation in Tunisia and Egypt motivated the protesters, but not only.”, says Ahmed Galal, President of FEMISE.  “We are witnessing the end of the Arab Exceptionalism, which will lead to the disappearance of dictators in favour of democracies, as has happened in other regions of the world”. A need for freedom recalls that the revolts were instigated by young, unemployed, urban graduates, which despite everything, places the need for freedom at the heart of economic issues. All the more so as Lahcen Achy, professor of economy at the National Institute of Statistics and Applied Economics (INSEA) in Rabat (Morocco) and scholar at the Carnegie Middle East Center in Beirut, puts it: the authoritarian model that exists in most Arab countries has survived mostly by offsetting the frustration of the people with public spending.

President of the FEMISE Scientific Committee Jean-Louis Reiffers, sees these changes as a challenge for the network of researchers who must update their own methods, re-evaluate their models to support future economic policies. He identifies five key issues to take into consideration to manage the transition: guarantee food prices, implement a non-corrupt democratic system, provide employment for graduates, develop SMEs and ensure regional balance between urban and rural areas.

Matts Karlson, Director of the Marseille Centre for Mediterranean Integration (CMI), believes Europe must support the southern Mediterranean countries by setting out a clear framework with goals. “This is how Europe helped countries in Eastern Europe to become democratic, and conditions in these countries seem much better than those in Estonia or Poland during their transition”. Their situation is even better than some European countries: Pierre Deusy Head of Economic and Trade Affairs of the Euro-Mediterranean partnership in the Union for the Mediterranean (UfM), says, that today, Italy is more indebted than Morocco, which he thinks is significant. However, he regrets that democratic change has not automatically led to a rupture of certain practices: “The rules of governance must be at the heart of reforms to work properly”. In this context, Pierre Deusy underlines the importance of the work done by FEMISE, to produce serious, independent studies. A view shared by Henry Marty-Gauquié, a Director representing the European Investment Bank (EIB) in Paris, and other members invited to explain the role of the international community in supporting the transition. Raed Safadi, Deputy Director of the Trade and Agriculture Directorate of the Organisation for Cooperation and Economic Development (OECD), is convinced that State governments must step down: “today, these States account for 70% of GDP, he reckons. In order to create dynamic economies, this proportion must be halved. “

Other than the plenary sessions, several studies were presented in parallel sessions on sustainable development, green growth, finance, employment, the impact of migration and trade liberalisation. The FEMISE papers are available form this link.

How were authoritarian Arab regimes able to have such a long-term hold in the Mediterranean?

Authoritarian regimes managed to keep their people down, whilst winning the support of Western countries. With the exception of Lebanon and Palestine, which are “hybrid” regimes, all other Arab countries are authoritarian. They used known methods to consolidate their power. They made up for the frustration of the people with public spending, based on nationalism, and by suppressing opponents. This year has now shown the limits of this system.

I don’t think that new authoritarian regimes could take a hold at the head of liberated countries. There’s no turning back for these countries. The transition phase, however, may take more or less time, depending on the country. Egypt, which is very conservative, and Libya, which has a particular history, may take longer to achieve true freedom. Tunisia, on the other hand, already has a head start. The other unknown is the effectiveness of the economic policies these new leaders will implement. If they do not achieve satisfactory results, we could witness the rise of populist discourse and face security abuses.

Is voter turnout in Arab countries sufficient to guarantee the desire for democracy?

Yes! All these events took place very quickly. But democracy is built step by step. The population has not yet grasped the new context. Islamist Parties now seem like a new force that deserve a chance. They were also the best organised to win these elections. We will see more rationality in political debate in the coming months.

“The end of the Arab Exceptionalism”

“Recent upheavals in the Middle East have shown that people in Arab countries share the same aspirations of other people around the world. Many thought that Islam, history or culture justified the presence and persistence of authoritarian regimes, but the Arab Awakening proved that notion wrong. The end of Arab exceptionalism means that the region must be treated like any other. The democratic impulse, which continues to spread across the region, is motivated by the desire for more freedom and social justice. An important ingredient for meeting rising expectations will however require speedy economic recovery. Otherwise, disillusionment could ignite a second revolution! In this regard, history tells us that in similar situations, all countries have periods of decline before bouncing back to grow over the long term. The duty of interim governments is to resist the implementation of easy solutions and to take the necessary actions to pave the road for sustainable development. For instance, countries should not address the problem of employment by hiring more civil servants. Transition is never easy, which is why international organisations must support the Arab Awakening with patience and persistence. “In my opinion, it will take years not months for the situation to stabilise, for democratic processes to mature and for more inclusive governance to prevail”.

“Support the choice of new leaders”

What is your assessment of fifteen years of FEMISE?

The FEMISE network has implemented a totally new approach to the Euro-Mediterranean partnership, based on work involving researchers from the north and the south.  This is a friendly network that has grown significantly, a true partnership between North and South. And the quality of our research has progressed over time, when FEMISE takes a position or advocating political action recommendations, they result from a dialogue between independent economists, researchers and people engaged in their country.

What role can FEMISE play in the new economic issues facing the Mediterranean?

FEMISE must support the choice of new leaders. We cannot be content to offer the same analyses as those given before the Arab Spring. The people have made significant demands. They must be taken into account. Five challenges have priority: to guarantee food prices, establish non-corrupt democratic systems, provide jobs for graduates, but also support SME development and ensure regional balance between coastal areas and the countryside.