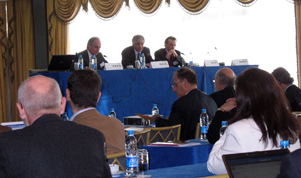 The FEMISE Association held its 2008 annual conference in Istanbul, Turkey on December 14-15. For the first time,

FEMISE organizes its conference in a South Mediterranean Country, which goes along with the new strategy of the association to enlarge the scope of dissemination and activities.

The conference was organized over two days with the participation of 80 persons, including representatives of FEMISE members, the European Commission and other intrested academics and researchers.

The two-day conference was organized under the theme of ‘The EU-Med Region in a Changing Environment’ and it included two plenary sessions and eight parallel sessions.

The plenary sessions addressed two issues that were considered on the top of the EU-Med’s agenda: (1) Union for the Mediterranean and (2) the financial crisis.

H.E. Mr. Marc Pierini (Head of the delegation of the Commission in Turkey) made the opening speech at the first plenary session addressing the issue of the UfM its impact on the region and the role that FEMISE could play. In the second plenary session, a panel of speakers presented their insights about the impact of the financial crisis on the countries of the region. The panel included: 2 representatives from the European Commission, the ex-governor of the Central Bank of Turkey and an academic professor from Egypt.

Presentations made in the panel sessions (will be available soon)

Final research papers addressing these issues will be available soon.