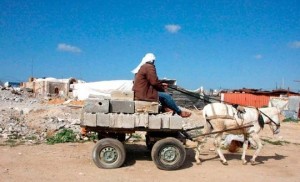 Remittances from migrant workers, a main driver of the Palestinian economy, have increased the gap between GDP and GNP and made the country more dependent on external resources. In order to stimulate economic activity and employment in the country, the Palestinian authorities must try and channel these remittances into investment rather than consumption.

Remittances from migrant Palestinians, working essentially in Israel and the Persian Gulf States, represented 20% of GDP on average between 1968 and 2007. But one should remember that this is just an average. In some years during the mid 1980s, this percentage was as high as 35% of GDP – well above the figure observed in other countries in the region (except Lebanon and Jordan).

In a report published by FEMISE (FEM33-16), Mahmoud Eljafari from Al-Quds University in Jerusalem attributes this situation to the dependency that the Palestinian economy developed over the years on neighbouring Israel. This dependency was heightened by the restrictions and constraints imposed by Israel for security reasons.

Since the start of the 1970s, Mr Eljafari explains, salary levels and exchange-rate policy have worked against the Palestinian territories, pushing more than a third of working-age Palestinians to look for a job in Israel. In addition, competition from often cheaper Israeli products, especially in agriculture owing to government subsidies, has pushed Palestinians towards imports rather than domestic products.

This explains why manufacturing levels in the Palestinian territories have fallen steadily and been replaced by services, meaning fewer opportunities to create local jobs. Agriculture, industry and construction represented 50% of GDP in 1990 but had fallen to 20% in 2009, hence the growing gap between GDP and GNP.

This de facto ‘one-way customs union’, combined with labour mobility, explains both the deterioration of the job market and why remittances have become the main driver of the Palestinian economy.

This situation has had some damaging effects, observes Mr Eljafari. As they have been concentrated essentially on consumption and healthcare spending, these remittances have not contributed to private-sector production investment in the Palestinian territories.

The 2005 withdrawal of Israelis from the Gaza Strip and the mobility restrictions imposed since have changed the situation. Fewer Palestinians now work in Israel, and many have moved to the Gulf States to look for work.

Remittances remain volatile, and the key for the Palestinian authorities is to promote a new economic model based on more balanced relationships with Israel and its other partners. This will require major changes to the Palestinian economy and public-sector reform with a view to encouraging the development of a manufacturing economy by channelling remittances into investment.


Article by Christiane Navas, Econostrum. It belongs to a series of articles published in the context of the partnership between Econostrum and Femise for the year 2011. These articles also feed the “Grand Angle” part of the Econostrum Website. You can find this topic and all information at the following address: www.econostrum.info