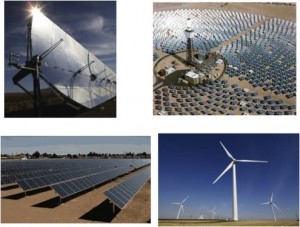 Unlike Algeria, Morocco has no oil or gas, but it does benefit from many hours of sunshine, which in the coming years could enable it to become a prodigious producer of renewable energy for itself and also for Europe.

Eleven hours of light per day and heat conservation for seven hours, compared to three hours in France! Morocco’s sunshine could create wealth and jobs for the future and become the country of “green gold”.

The country already has a relatively high installed wind and solar energy capacity. Given its proximity to Spain (14 km), it benefits from the most advanced interconnection with Europe in the region. Electric cables already allow electricity from Morocco to be exported.

As Alejandro Lorca and Rafael de Arce, professors of economics at the Autonomous University of Madrid, explain, “In 2011 we developed a project with Moroccan teams to study the macro-economic effects of installing solar thermal power stations in Morocco”.

In the report (FEM34-02) entitled “Renewable Energy and Sustainable Development in the Mediterranean: Morocco and the Mediterranean Solar Plan”, the two research directors analyse the economic effects of building concentrated solar power plants (CSP), photovoltaic power plants and wind farms in Morocco over the next thirty years. Concentrated power plants, developed in the 2000s, show the greatest potential. Wind energy is also expected to enable Morocco to consume and export electricity.

Increase in GDP and employment in seven scenarios

In this way, Morocco could sell 20% of the renewable energy produced, especially to France. After the catastrophe of Fukushima and given the decline of fossil fuels, renewables are expected to take an increasing share in the energy mix.

Germany, Spain and the United States are the main manufacturers of mirrors for concentrated solar plants. Several scenarios are possible for Morocco. Assuming, in the worst case, Morocco imports all the components of the power plants and simply installs them. That would contribute to an increase in GDP of 1.17% and the creation of 319,000 new jobs. In the best-case scenario, including integrating production, GDP would increase by 1.91% and 482,000 jobs would be created.

However, building production plants for concentrated solar power stations and exporting a share of the energy would require an estimated 8-billion-euro investment according to economists. “Discussions are in progress between the French and Moroccan governments to put in place incentivising financial mechanisms to attract foreign investors to build CSPs”, says Alejandro Lorca. Currently, the first CSP is in service in Ain Beni Matar, and the second, located in Ouarzazate, is expected to enter service in 2013.

Article by Nathalie Bureau du Colombiers, Econostrum. It belongs to a series of articles published in the context of the partnership between Econostrum and Femise for the year 2012. These articles also feed the “Grand Angle” part of the Econostrum Website. You can find this topic and all information at the following address: www.econostrum.info

Registration for the Econostrum newsletter is available here:http://www.econostrum.info/subscription/