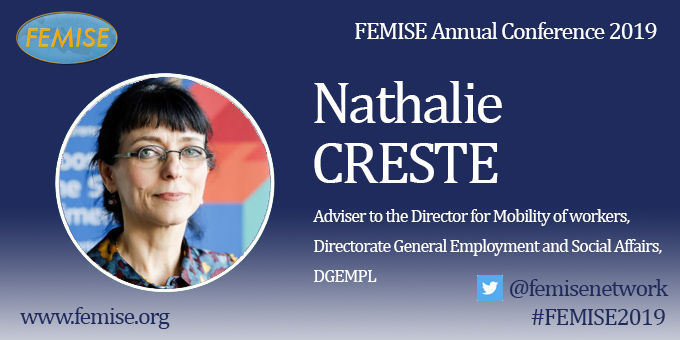 Nathalie Creste is French. She entered as an EU official in 1991 in the General Secretariat of the Council, working successively in the Department of Agriculture, the Cabinet of the Secretary General of the Council and the Legal service. In 2005, she joined the European Commission where she occupied the posts of Head of Unit “Communication” in Directorate General Justice Freedom and Security, Head of Unit “Monitoring, Reporting, Verification of Greenhouse gas emissions” in Directorate General CLIMA, Adviser /Head of the Task force responsible to put in place the EUlaissez-passer and Head of Unit “Ethics and Ombudsman” in Directorate General Human Resources and Security. She is currently Adviser to the Director for Mobility of workers in Directorate General Employment and Social Affairs where she is notably in charge of the relations with the Union for the Mediterranean (UfM) for Employment and Labour matters. Recently, she was in charge of the organization of the 4thUfM Ministerial Conference on Employment and Labour in Cascais Portugal – 2-3 April 2019.