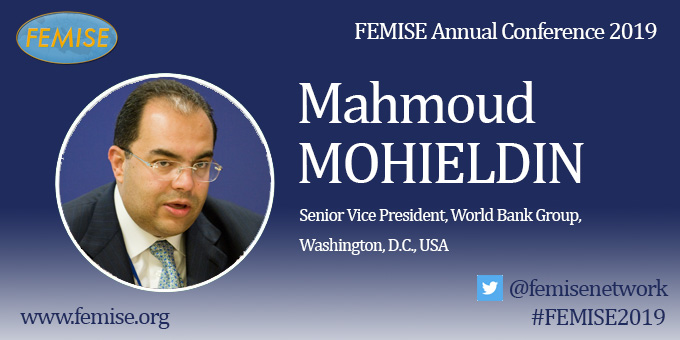 Dr. Mohieldin is a Senior Vice President at the World Bank Group, responsible for the 2030 Development Agenda, UN Relations and Partnerships.

Before joining the World Bank Group, Dr. Mohieldin held numerous senior positions in the Government of Egypt, including Minister of Investment from 2004 until 2010. He also served on several Boards of Directors, including the Central Bank of Egypt, as well as in the banking and the corporate sectors. Dr. Mohieldin was a member of the Commission on

Growth and Development, and was selected by the World Economic Forum as a Young Global Leader.

Dr. Mohieldin is a Professor of Economics and Finance at Cairo University. He is also an Honorary Professor at Durham University, UAEU, and Nile University, and is member of the Advisory Board of the Durham Business School. Dr. Mohieldin has also held leading positions in national and regional research centers and think tanks. He has authored numerous publications and articles in the fields of international finance, growth, banking, financial development, and economic planning.