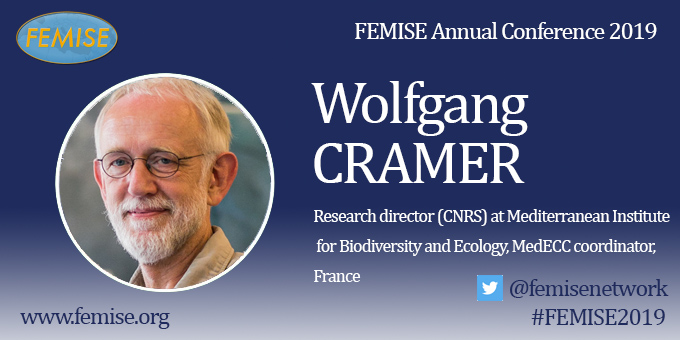 Professor Dr Wolfgang Cramer, environmental geographer and global ecologist, is research director (CNRS) at the Mediterranean Institute for Biodiversity and Ecology (IMBE), in Aix-en-Provence (France). Wolfgang Cramer received his academic training at the Universities of Gießen/Germany and Uppsala/Sweden (plant ecology, Ph.D. 1986). From 1987 to 1993, he taught and conducted his research at the Department of Geography, Trondheim University (Norway). In 1992, he co-founded the Potsdam Institute for Climate Impact Research (PIK) in Potsdam, Germany, as head of the department “Global Change and Natural Systems” and later “Earth System Analysis”. In 2003, he was appointed full professor of global ecology at Potsdam University. In 2011, he left Potsdam for the Mediterranean Institute for Ecology and Paleoecology (IMEP), in order to help its transition to IMBE. 2017, he was elected associated member of the Académie d’Agriculture de France.

The scientific contributions by Cramer’s research group (140+ papers) were initially in the area of modelling forest dynamics under climate change. He then began to seek a broader understanding of biosphere dynamics at the global and continental scale, including aspects of natural and human disturbance as well as biodiversity. He has been directing an FP5 European ecosystem service modelling project, ATEAM, and co-led a number of projects in later European programmes. Based on ATEAM/AVEC, he has established popular, two-weeks long annual summer schools for young experts in the field of biodiversity and ecosystem services (now run by the EU Network of Excellence ALTER-Net).

Wolfgang Cramer has been and still is a contributor in many roles to the IPCC (Peace Nobel Prize 2007) and the Millennium Ecosystem Assessment. He is (with Elena Bennett, McGill University) co-chair of the Science Committee of ecoSERVICES and a PECS Fellow. He is also (with James Ford, McGill University) co-chief editor of the Springer Nature journal Regional Environmental Change.

h J R
Femise @femisenetwork #WorldHealthDay #COVID19 threatens our health, societies & economies. But it is an opportunity to rethink our prior… https://t.co/6ekkGFtq1d