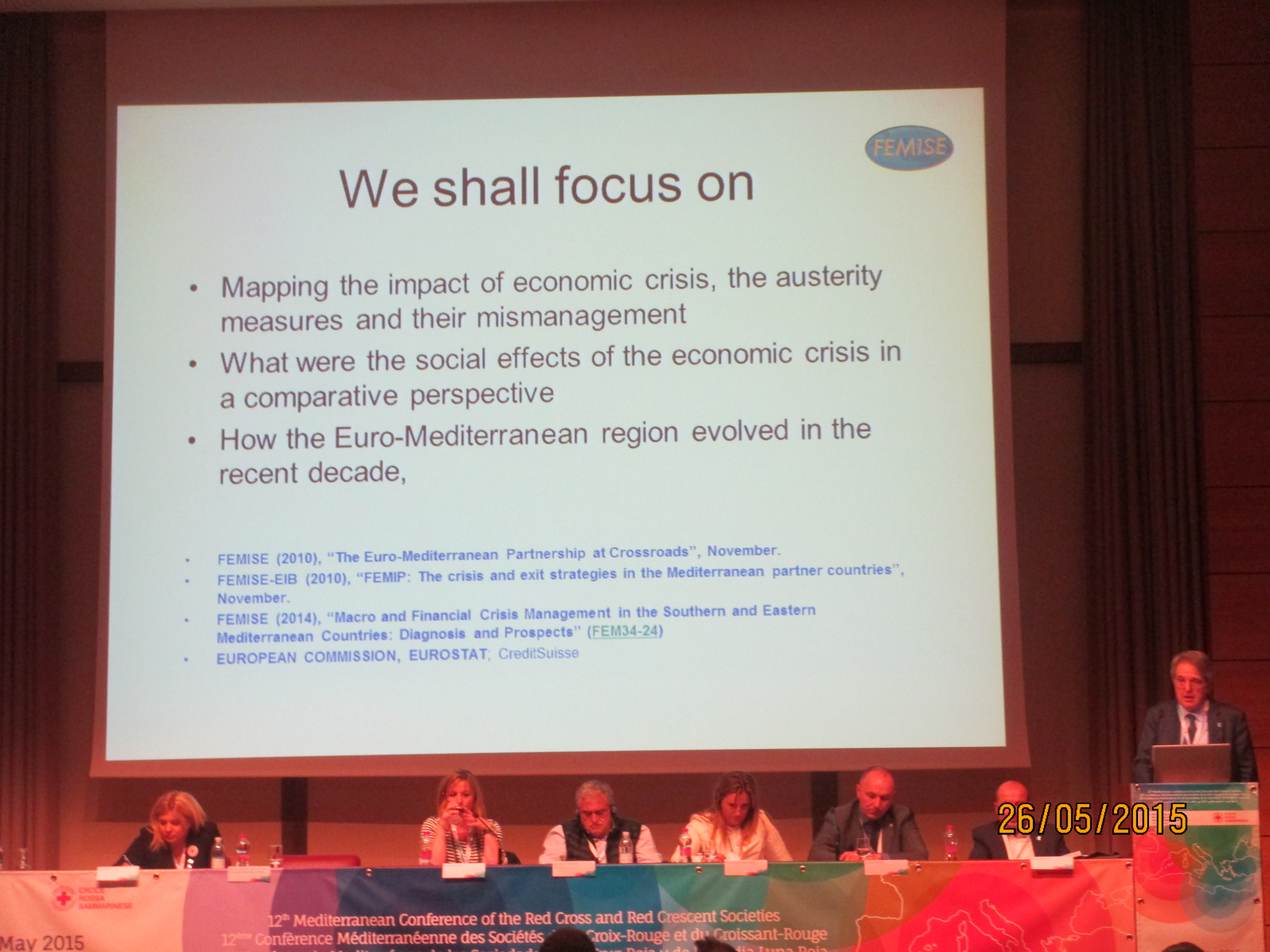 How severe are the social effects following the economic crisis and the policies that ensued? As guest speaker in San Marino at the 12th Mediterranean Conference*, Pr. Sergio Alessandrini, represented FEMISE and offered his expertise on the economic crisis and its social impact which is often not that dissimilar between the two shores.

“Mapping the impact of the economic crisis, the austerity measures and their mismanagement could signal the loss of convergence and the emerging of dualism within the European economy” notes Pr. Alessandrini, highlighting how some countries managed to stay unscathed (such as Germany) while others remain heavily clouded, specially those in Southern Europe (Portugal, Greece and Spain).

But what about the social effects of the economic crisis in a comparative perspective? Employment was among the most hit and inequalities persisted in both shores. 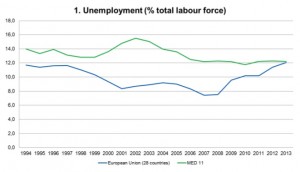 In countries of Southern Europe the outlook shows cumulative decline in economic activities and employment is continuing to diverge (52% of European Labour Markets are still below the pre-crisis peak). The number of unemployed people hit a historic high of 26.6 million (or 11% of the active population) in the EU28 countries.

While in the EU, the most affected are those with lower education, in the Mediterranean Partners Countries (MPs) unemployment is the highest among the highly educated (in Egypt and Jordan for instance, more than 30% and 36% of the unemployed have tertiary education).

“Youth unemployment is a particular problem for both the North and the South” states Pr. Alessandrini, adding that “long-term unemployment and inactivity ‘threatens an entire generation’ with nearly a quarter of economically active young people in Europe being unemployed, more than 50% in Greece and Spain, and 40% in Italy”. The negative effect for this generation is the fact that they will be exposed to poverty when they are pensioners due to long spells of unemployment.

Comparing Southern Europe to the Southern Mediterranean Pr Alessandrini stressed how high unemployment and lower participation of young people are indicators of the low capacity of these economies to offer opportunities and employability promotion. Growth strategies of the Barcelona Process were not enough to create needed jobs, therefore, the new strategies need to be more inclusive for the poor, the women and the NEETs (Not in Education, Employment or Training) and to build their skills and employability. 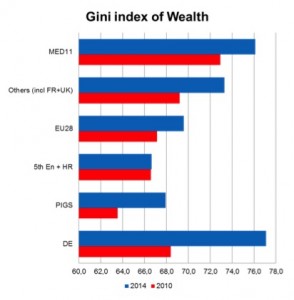 Pr. Alessandrini also highlighted that while financial transfers made towards the EU countries to support the crisis has saved most countries from the risk of poverty, inequalities persisted and in some cases even grew. In the Southern Mediterranean countries, it is clear that inequalities have grown in the past few years.

In his closing statement he emphasized that what is needed first and foremost is a new European strategy for qualitative growth and employment that recognizes that public debts cannot be sustainably reduced by austerity, but by growth”.

Based on his contribution, the San Marino declaration acknowledged : 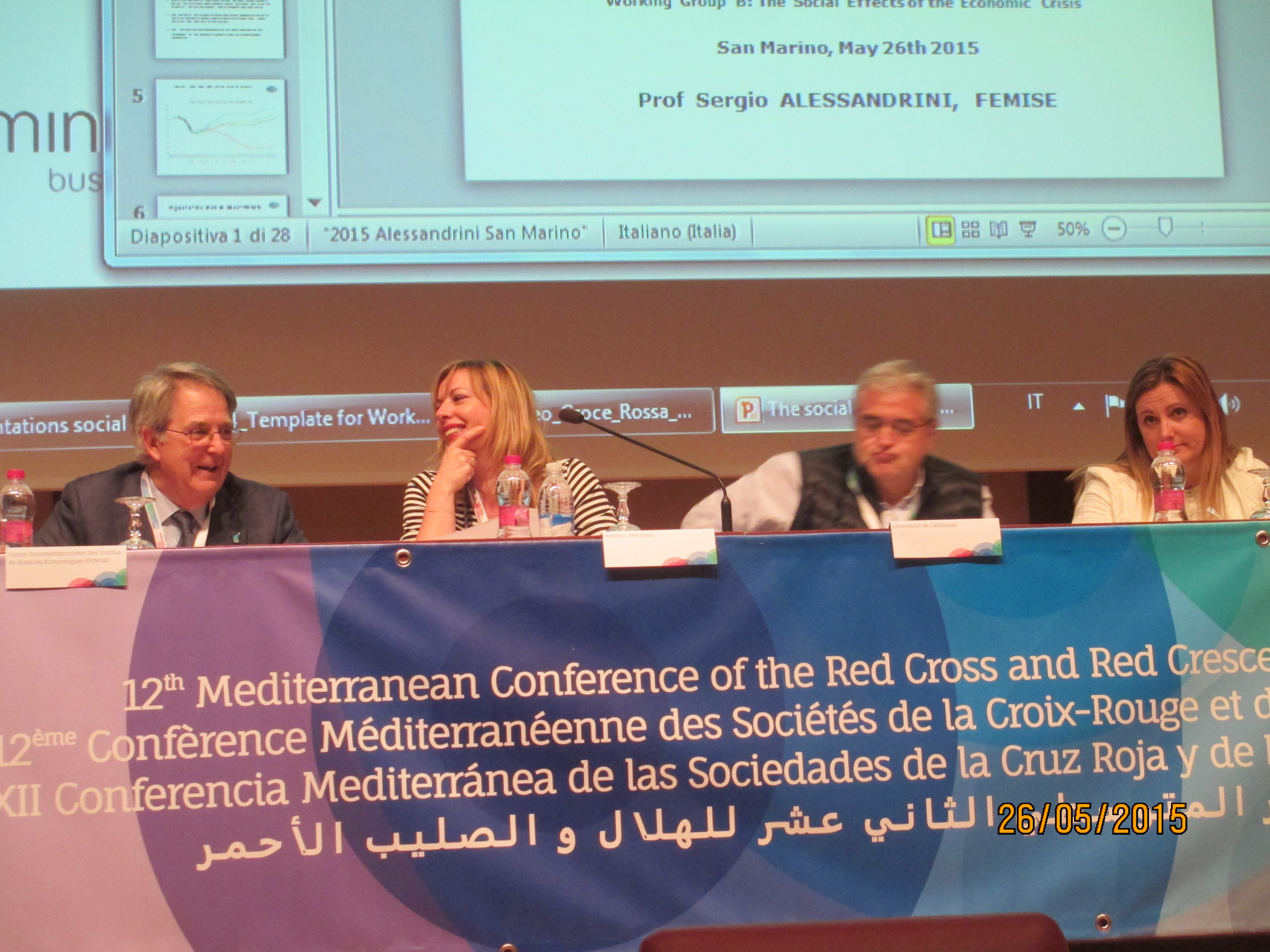 The San Marino declaration can be found here

*Between 25th and the 28th of May 2015 the Republic of San Marino was the host of the 12th Mediterranean Conference of the Red Cross and Red Crescent Societies (RCRC) in which FEMISE was invited to provide a speech about the social effect of the crisis on the EU-Med region.

The Mediterranean Conference – which takes place every four years as a high level institutional regional meeting within the International Movement of RC/RC – was structured according to various thematic sessions including the theme of the « Social effects of the economic crisis ». It was in this session that Pr Alessandrini of FEMISE was invited as one of the main speakers offering his views on the economic crisis and its regional impact.