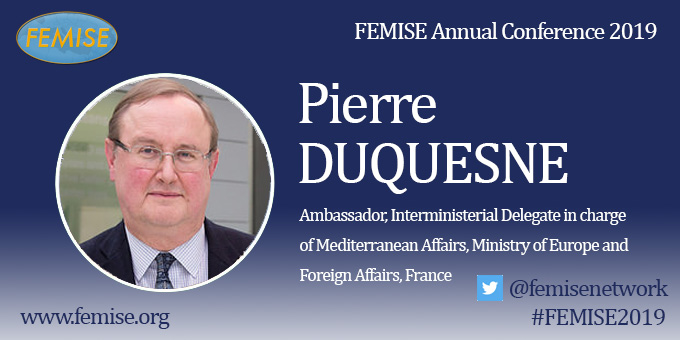 Ambassador Pierre Duquesne took up his duties as Interministerial Delegate in charge of Mediterranean Affairs by mid-October 2017. In that position, he is the French Coordinator for the CEDRE Conference (Conférence économique pour le Développement, par les Réformes et avec les Entreprises) in support of Lebanon.

From 1980 to 1984, and then from 1986 to 1991, he served in the Treasury Department (Ministry of Economy and Finance) in various positions. From 1984 to 1986, Mr Duquesne was Head of Customer Dealers Foreign Exchange Department at Indosuez Bank.

From 1991 to 1996, he was Deputy Director for Multilateral Affairs of the French Treasury in charge of exchange matters and economic and monetary European and international affairs. In this position, he was negotiator of the Maastricht Treaty, member of the Economic Policy Committee and alternate member of the Monetary Committee, both of the European Union. He was also member of the Board of Directors of the European Investment Bank (EIB). From 1996 to 1997, Mr. Duquesne was Deputy Secretary-General of the Commission bancaire, member of the Basel Committee and of the sub-committee on banking supervision of the European Monetary Institute (EMI). From 1997 to 2001, he was Senior Advisor of the Prime Minister for economic and financial (domestic and international) affairs. From 2001 to 2007, he served as French Executive Director for the International Monetary Fund (IMF) and the World Bank (WB). In that capacity, he was Chair of the Audit Committee of the World Bank (2002-2007) and of the Ethics Committee of the IMF (2006-2007).

From 2008 to 2014, Mr Duquesne was Ambassador for economic issues related to reconstruction and development in the French ministry of Foreign Affairs. He organized international donors and support conferences for various countries in transition, in crisis or affected by natural disasters, such as Palestinian Territories, Afghanistan, Haiti, Mali, Pakistan, Serbia, Bosnia and Herzegovina and Tunisia. In that context, he was for example Head of the French Interministerial Mission for the reconstruction of Haiti and France’s Representative to the Interim Haiti Recovery Commission (2010-2011).

From October 2014 till October 2017, he was Permanent Representative of France to the OECD. Mr Duquesne was also the Chair of the OECD Development Centre’s Governing Board from July 2015 till January 2018.