This work explores the question of the dynamic link between the development of renewable energies and growth. The main results of this work can be summarized as follows. First, the results show that efforts to develop renewable electricity generation must be supported in the short term because the relationship between renewable electricity production and GDP per capita is asymmetrical. In this case Algeria, Egypt, Morocco and Turkey are concerned by this strategy which will enable them to increase well-being in the long term. Second, the current level of renewable electricity generation in Tunisia and Israel is low enough to have a significant effect on welfare. Both countries must therefore continue their efforts to produce renewable electricity in order to reach levels that allow them to have an impact on well-being. Thirdly, Iran and Lebanon are in a strategy that has a negative impact on welfare, namely hydroelectric power generation. They must try to develop other sources of energy by exploiting their potential in wind and solar energy.

« Med Change Makers » are text and video-based interviews that allow dynamic researchers of the FEMISE network to illustrate how their research addresses a policy-relevant question and how it contributes to the policy-making process in the Euro-Mediterranean region.

Author of the MED BRIEF, Dr. Alexandra Flayols highlights the important role of secondary education in gaining access to paid employment. However, many young people drop out of school early. The analysis of reasons for stopping studies is essential so that public authorities can put in place effective measures. Interview :

1. In this policy brief, early-stage obstacles to the professional integration of young people are explored, notably regarding access to education. However, aren’t there other key factors hindering this insertion? So why is it more optimal to invest in education?

Regarding the factors that can more specifically be attached to the Moroccan case, the place of residence may for example hinder the professional integration of the youth. The region of Marrakech-Tensift-Al Haouz (MTH), which is the subject of this study, is mainly rural (198 rural communes against 18 urban). Although the OCEMO survey (2008) used in this work does not allow to distinguish the place of residence due to lack of data, our results show a differentiated impact of the level of education in urban and rural areas. In addition, the lack of job creation in the private sector, despite the lower dynamic demand for workers in the public sector, which until the 1990s was the largest employer of skilled workers, generates additional insertion obstacles.

We have chosen to focus on education because besides the fact that it is a determining factor of professional integration, it is a central issue in Morocco where education is experiencing considerable difficulties. Moreover, the fact that having a degree does not constitute a protection against unemployment in Morocco, contrary to the case of developed countries, pushes us to pay particular attention to this problem. Investment in education has become a standard in developed countries, however, while it is important for economies to move up the international value chain, it is not a sufficient condition in the access to employment. The match between trainings, formations and the job market is thus particularly important. The quality of education is also paramount and is highly criticized in Morocco.

2. What are the main reasons you have identified to explain why young people quit their studies in Morocco?

The first reason that pushes young Moroccans to abandon their studies is financial (23%). It is followed by lassitude (21%) and poor school results (15%).

The reasons for dropping out of school are indicative of the difficulties encountered in the education system and may also allow public authorities to target their interventions. Thus, by grouping the different reasons for dropping out according to whether they are voluntary or involuntary, we have seen that 60% of young people are quitting schooling; this rate even reaches 67% in rural areas. We observed other disparities by place of residence, but also by gender. Young girls in rural areas are thus more likely to be refused by their parents the right to peruse their studies (12% versus 6% in urban areas). The distance from school is also an important reason for stopping studies since it concerns 19% of young people in rural areas compared with just 4% in urban areas.

One of the first ways that could be implemented concerns the quality of education which, as we saw in the previous question, could be a means of encouraging young people to continue their studies. In recent years, private schools have experienced a significant growth in Morocco yet, their quality remains questionable and their high tuition fees reinforce the inequalities in access to education between students of wealthy families and those from a more modest social background.

The quality of education concerns its content as well as the supervision and creation of new schools. The language of learning, for example, causes significant difficulties for some young Moroccans. French, which was considered a foreign language, is now used as the language of instruction in higher education for science and economics. Thus, the orientation of young people who do not have the expected level in French is then constrained.

It is also essential to pay particular attention to the opportunities of the sectors proposed, whether for general education or vocational training. This could be an additional motivation for young people to continue in these streams. Finally, the establishment of bridges in the education system could also reduce the number of drop-outs as young people may be able to reorient themselves more easily.

4. As you pointed out, some schooling drop outs are involuntary. What recommendations would you give the public authorities to limit these cases or at least to facilitate the transition of these young people to the workplace?

Among the involuntary reasons for stopping studies, the financial reason is the most important. These results indicate that there is considerable room for maneuver to improve the retention rate of youth in the MTH region. Although the reforms of the late 1990s have improved access to education, it is still limited in rural areas, especially for young women. It is not necessarily about increasing spending on the education sector, but about better targeted measures such as the Tayssir program. The latter aims to reduce absenteeism by granting scholarships to hard-working students from the poorest households. The pilot phase in some rural communes shows positive results, particularly in the highest levels of education. Our results have shown that a woman with a level of education at least equal to secondary school is 1.7 times more likely to have access to a paid job yet, women’s access to education is particularly constrained in rural areas since they are 1.4 times less likely to have access to secondary education than women in urban areas. Measures targeting this subpopulation would therefore be beneficial.

In addition, the hypothesis of a lack of supervision or teachers or inappropriate content of lessons could explain the lassitude felt by young people as well as their academic failure. The quality of teacher training should therefore also be at the heart of the Moroccan government’s concerns. The congestion rate of sophomore class rooms is also high; therefore, less overcrowded classes would, with no doubt, favor better learning conditions.

Lastly, to facilitate the transition to the workplace, partnerships with companies could be envisaged, particularly with regard to vocational trainings. This would make it possible to better target the needs of the labor market like the SIVP in Tunisia. These partnerships could be accompanied by measures to encourage the hiring of these young people whom the company would have contributed to the training.

5. Are there not different trends in the length of studies and different mechanisms behind the professional integration of young women and men? Would that imply separate recommendations by gender?

Although access to education has improved for women, there are still disparities. We do not have precise data on the duration of studies by gender. However, estimates by Barro and Lee (2010) find a gap of 1.67 years in average length of schooling. In addition, parents’ refusal to continue studying is an important reason for young women’s drop outs, especially in rural areas. The pursuit of education for young women therefore seems more constrained than that of men.

Moreover, dropping out could also correspond to the desire to create a family which is a motive mentioned only by young Moroccan women and never mentioned by men. This choice necessarily has an impact on the professional integration of women either because of a too low level of education if they dropped out of school too early or because of the hard reconciliation between their family responsibilities and their professional life.

Mechanisms targeting professional integration should be differentiated by gender. For example, studies show differences both in the implementation of employability strategies and in the exclusion of certain professional spheres. If the authorities wish to improve young women’s access to the labor market, particular attention should be paid to them.

The MED BRIEF is available for download by clicking here. 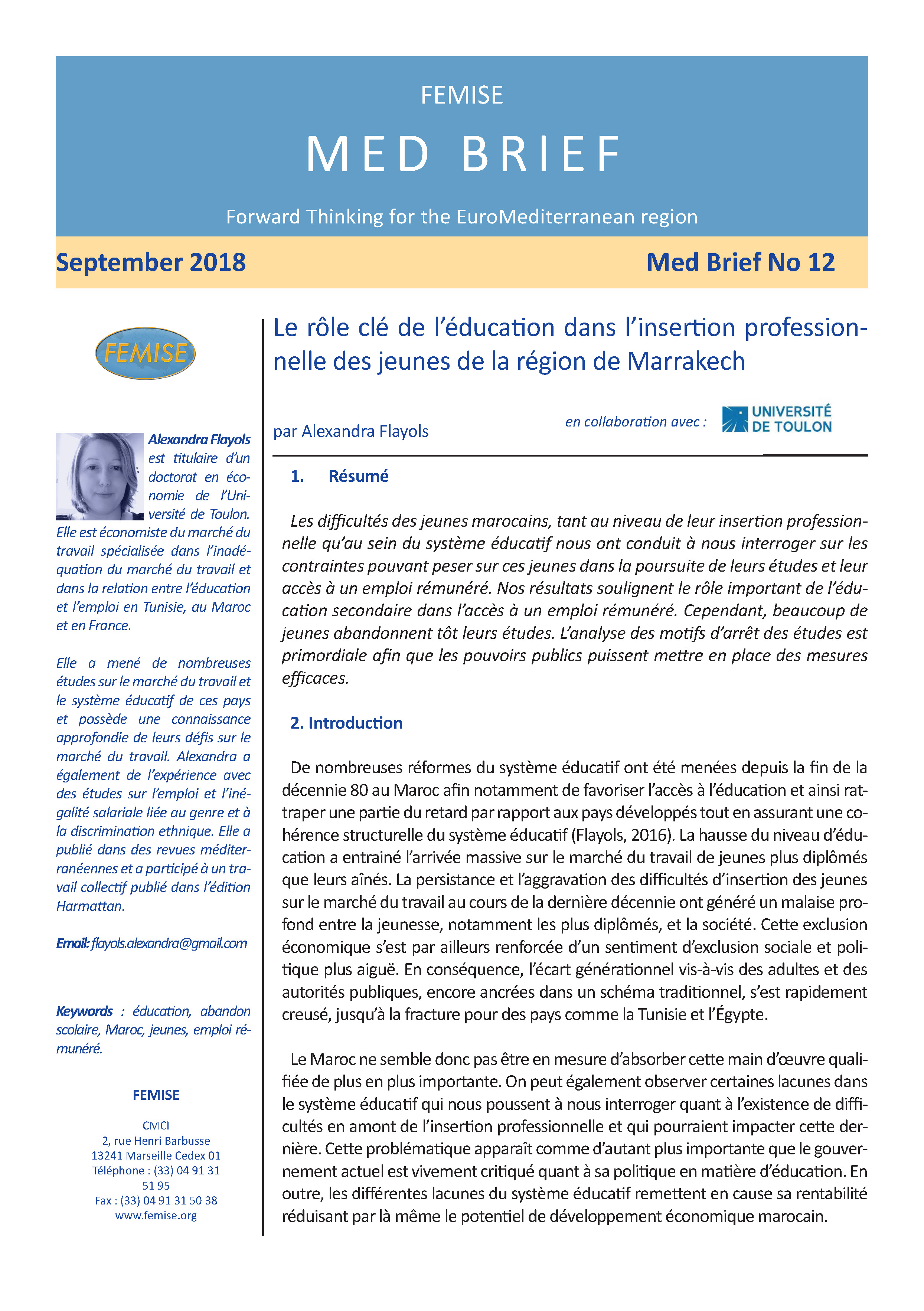 The latest issue of MED BRIEF “The key role of education in the professional integration of young people in the Marrakech region” is available (in FR) by clicking here.

Summary: The difficulties of young Moroccans, both in terms of their professional integration and in the education system have led us to question the constraints that can weigh on these young people in the pursuit of their studies and their access to paid employment. Our results highlight the important role of secondary education in gaining paid employment. However, many young people drop out of school early. The analysis of reasons for stopping studies is essential so that public authorities can put in place effective measures.