Femise > Conferences and Seminars > Seminars > Presentation of the EuroMed Report on: “Repatriation of Refugees from Arab Conflicts” (Nov 21st, Cairo)

Theme : Presentation of the EUROMED Report on: « REPATRIATION OF REFUGEES FROM ARAB CONFLICTS: Conditions, Costs and Scenarios for Reconstruction” *

FEMISE and ERF have the pleasure to announce that the FEMISE-ERF report will be presented in a special session that will be organised by ERF during its 2-days workshop (20-21 November in Cairo, Egypt). The special session (on the 21 of November) will host authors of the report, allow them to present the main message of their chapters and open a debate with institutional representatives and policy stakeholders on tangible solutions.

The prospects for early re­patriation of refugees who have fled conflicts in Arab countries in recent years do not yet look promising. Nevertheless, not only have discussions about repatriation started at both national and in­ternational levels, but there is also a steady, though still limited, stream of refugees in neighbouring countries trickling back to their war-ravaged homes. With the doors of naturalization and resettlement all but closed and the socio-economic situation in host countries weakening, the refugees have found themselves caught in very difficult circum­stances.

While mass repatriation at this stage remains premature for all war-torn countries, the current situation dictates that we recognize and unpack the issue of repatriation in all its dimen­sions, so that if and when the time comes, informed actions can be taken. This would help to support the most positive outcomes – pri­marily for the refugees, but also for other stakeholders, such as host communities and those left behind in the conflict countries.

This is what this year’s FEMISE-ERF Euromed Report on « REPATRIATION OF REFUGEES FROM ARAB CONFLICTS: Conditions, Costs and Scenarios for Reconstruction”* is addressing in its four chapters. The authors look into the characteristics of the refugees and the conditions affecting their decisions to return. This overview is followed by an analysis of the possible political settlement scenarios and reconstructions’ potentials, with a focus on the possible role of the international community. The authors then analyse the economic costs of conflicts as well as post-conflict growth scenarios. The report concludes by highlighting the main findings and providing policy insights into how to address this issue to ensure a safe, sustainable and dignified return of refugees to their home countries. 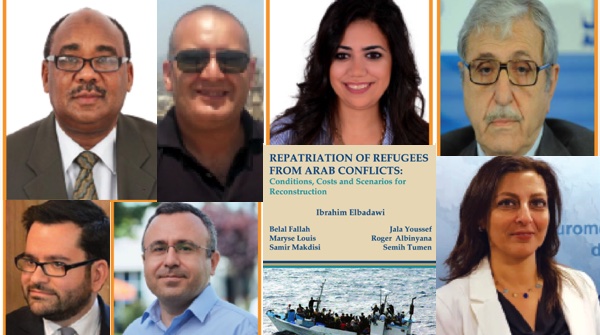 * This report received financial support from the European Union through the FEMISE project on “Support to Economic Research, studies and dia­logues of the Euro-Mediterranean Partnership”. Any views expressed in this report are the sole responsibility of the authors.