Theme : Strengthening the partnership between the European Union and the Maghreb through vocational training and entrepreneurship 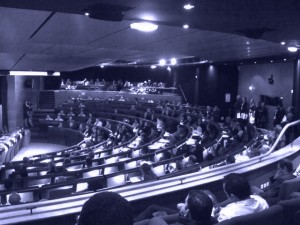 This eleventh conference organized by the Mediterranean Institute / Femise and the Circle of Economists, will be held in the premises of la Villa Méditerranée on Saturday, November 7th, 2015, the final day of the Marseilles’ Mediterranean economic week, commencing on November the 4th.  Given the success of the event, the initiating communities, the Provence-Alpes-Côte d’Azur Region and the City of Marseilles, were joined by the European Investment Bank, the Centre for Mediterranean Integration based in Marseilles and the Economic Cooperation Office for the Mediterranean and the Orient

This year the conference will support the initiative of the Luxembourg Presidency of the European Union (Luxembourg takes the EU presidency from July 1st for six months), to strengthen the cooperation between Europe and the countries of Maghreb (Algeria, Morocco and Tunisia) with regard to vocational training and entrepreneurship. This 11th Rendezvous, explicitly supported by the Luxembourg Presidency of the EU has the ambition to formulate operational proposals arising from the discussions.

The conference chose to be centred on vocational training, in line with the EU Presidency’s initiative, in an attempt to discuss the contents of this initiative in which the ambition is to be directly multilateral. In addition, it also brings together several Economic and Social Committee presidents from the regions in question who need to become powerful advocates of the demands of the civil societies.  Evidently, the topic of youth employment is at the heart of their concerns. This alarming situation clearly demonstrates that this is a concern for both the Northern and Southern Mediterranean, that the efforts implemented for youth training and entrepreneurship in the Maghreb are of a central interest to the European countries.  These efforts must be linked with those carried out in Europe and must be presented and discussed in the light of good practices illustrated by the successes achieved in some countries. Finally, we ask the sectors concerned about possible mobilization of the businesses and the organization of the proposed cooperation.

For more information and for the program you may click here.