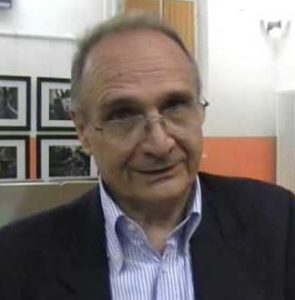 It is with deep regret that FEMISE was informed of the loss of one its family members, Prof. Bruno Amoroso, on January 20th 2017.

Prof. Amoroso, was of one of the founding members of Femise and a valuable member of its Board of Directors since 2005.

Born on December 11th 1936, Bruno Amoroso was a Danish/Italian economist, author, and Emeritus Professor of Economics at the Department of Society and Globalization of the Roskilde University.

He moved to the University of Roskilde in 1972, where he eventually was appointed the Jean Monnet Chair and was, since 2007, the Docent Emeritus and was also President of the Federico Caffè Study Centre.

Bruno Amoroso always showed great interest for the greater Mediterranean region, having published on issues related to European construction and policies for the South Med neighborhood.

Femise lost a valuable member and a dear friend.  Our thoughts are with his family and close ones.

The FEMISE Staff and Members

“May God Rest his soul in peace. Unfortunately I didn’t have the chance to meet Prof. Amoroso, as I have just recently joined ERF as the new Managing Director. I was very much looking forward working with him as a valuable member of the FEMISE Board, as well as other members.  I express my sincere condolences to his family and friends and to the FEMISE Board who lost a dear colleague and partner”.  Ibrahim Elbadawi, Managing Director, Economic Research Forum

“I am deeply sad to learn of the passing away of  Bruno Amoroso. He was friend with whom I had very enjoyable intellectual discussions . We shall all miss him“. Samir Makdisi, American University in Beirut, Lebanon

“I was deeply saddened to hear about the passing away of one of the important FEMISE founding members Prof Bruno Amoroso. I would like to express my sincere condolences to his family and FEMISE family”. Abeer Arafat, Royal Scientific Society, Jordan

“I was very sad indeed to hear of Bruno’s passing. Please send our heartfelt condolences to his family”. Michael Gasiorek, Sussex University, UK.

“Please, send our condolences to Prof. Amoroso’s family. It was a really privilege to share meetings, conferences, and the FEMISE challenges with him”.  Rafael de Arce, Universidad Autónoma de Madrid, Spain.

“I would like to express my sincere condolences to the family of late Professor Bruno Amoroso and to FEMISE community. May he rest in peace”. Subidey Togan, Bilkent University, Turkey

“Very sorry to hear bad  news  about the loss of Professor Bruno. May he rest in peace.” Mahmoud  ELjafari, AlQuds University, Palestine.

“Please convey my sincere words of sympathy to his family. We will miss him really a lot.” Jan Michalek, Warsaw University, Poland

“Please extend my deepest sympathies for the loss of Prof. Bruno Amoroso. He will be sadly missed”. John Grech, Competitive Malta, Malta

“With Professor Bruno Amoroso we had relations with exceeded largely our already fertile and important Femise connections. As being the only two “Nordic” members of Femise Board of Governance we had, of course, a certain number of reciprocal, even ‘conspirative’ relations. But our cooperation exceeded the Femise framework, it had also very pleasant extensions here in the “Nordic world” as well as in the Northern and Southern rives of the Mediterranean – was it is Salerno or in Algiers where we have a lot of common friends. The death of Bruno Amoroso is for me a personal loss, and I beg your benevolence to convene all my condolences to his family and to all close to him”.  Tuomo Melasuo, University of Tampere, Finland.

“It is very saddening to know that Bruno passed away. He was a great person and it is a big loss for FEMISE. My condolences to his family and friends”. Mongi Boughzala, University Tunis El-Manar, Tunisia

“I am deeply saddened by the passing away of one of our FEMISE founding team and FEMISE Board member, Prof Bruno Amoroso. On this sad occasion, I would like to express my condolences to his family and to the great FEMISE family. “, Ahmed Driouchi, Al Akhawayn University, Ifrane, Morocco.