Theme : Towards a New Dynamic to Sustain the Economic and Social Balances 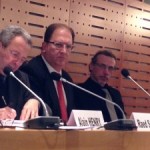 FEMISE launched its 2013 Euromediterranean Report on the 6th of February 2014 in Paris, France. This year the report is entitled: “Towards a New Dynamic to Sustain the Economic and Social Balances“.

The launch was hosted at the Agence Française de Développement (AFD). The contributors to the report presented their views on what social paths could be taken within the Mediterranean Partners’ countries that would respond to the aspirations of their populations, while restoring good economic dynamics. Specialists from the region reacted and gave their views on the report’s content.