Theme : Unlocking the Potential of the Private Sector in South Med Countries 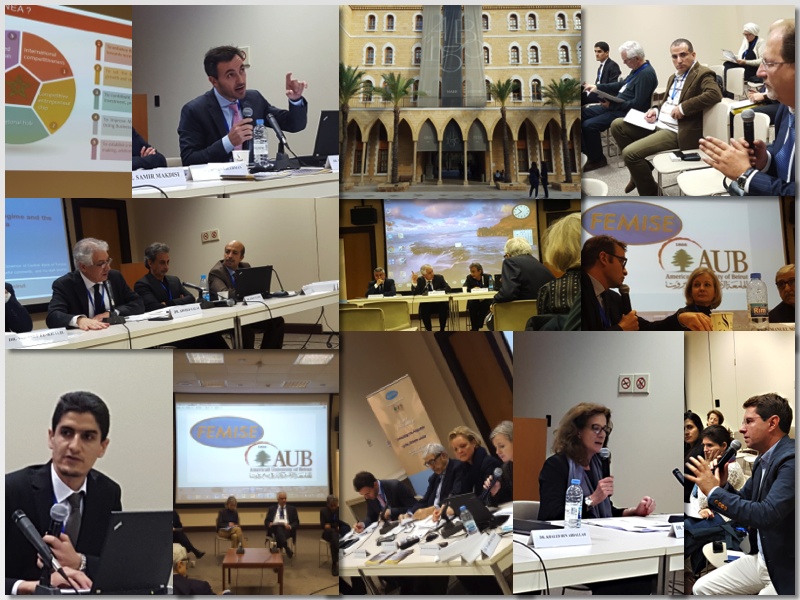 FEMISE organized a Policy Seminar on the theme of “Unlocking the Potential of the Private Sector in South Med Countries” on the 5th of December 2016, in Beirut, Lebanon. The seminar was organised in collaboration with our partners, the Institute of Financial Economics, at the American University of Beirut (AUB).

In three sessions and one roundtable discussion, speakers and participants  to the seminar were looking into finding the answers to three main questions: 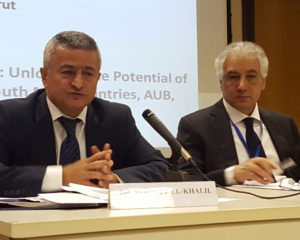 In the first session the speakers highlighted the macroeconomic challenges that are faced by the South Med Countries and which had implications on the development of the private sector. In Lebanon, Dr. Youssef El-Khalil, emphasized the role of the Lebanese Central Bank in stabilizing the economy going through different types of crises in the past 3 decades (i.e. war, political instabilities, refugees from neighbouring Syria). His main message was that the mandate of the Central Bank is not only about stable inflation or stable currency but that it has a social responsibility of promoting inclusive growth, through encouraging entrepreneurial activities and jobs creation among the young and the educated.

In Tunisia, facing the macroeconomic challenges and the lack of resources implied the adoption of two IMF programs (amounting $4.7 million) as explained by Dr. Sami Mouley (University of Tunis El Manar) (presentation available here). The programs aimed at providing stability to the economy and endorsing the financial and credit reforms. However, as the private sector development remained low, accompanying mechanisms directed towards the sector were put in place, these included regulatory reforms, stimulating better quality bank loans, floating the currency, etc. 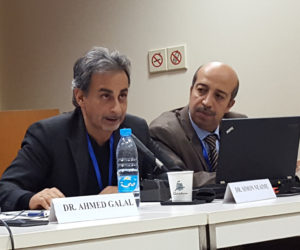 The limited fiscal space and the implementation of fixed exchange rates regimes have negatively affected the efficiency of the Central Banks, according to Dr. Simon Neaime (AUB) (powerpoint presentation available here). Therefore, traditional stabilization monetary and fiscal mechanisms will be difficult to implement as they could lead to further imbalances. Therefore, Dr. Neaime favours alternative mechanisms such as reducing the size of the public sector and the public spending, while giving more room to the private sector. These mechanisms could be coupled with reform strategies that improve the expectations of the private sector. Linking the growth with the private sector development is an extremely important measure that must be considered for the South Med countries.

The second session was evolving around the obstacles that the private sector is facing and how to overcome them. An overview of these challenges provided by Prof. Patricia Augier (FEMISE), pointed out to the political instability, access to finance, corruption and inefficient infrastructure. 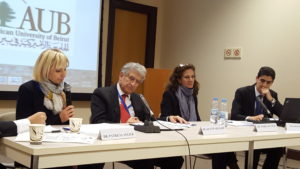 Following this, speakers from diversity of backgrounds spoke about their own experiences. The project entitled: “Enhancement of the Business Environment in the Southern Mediterranean – EBESM” was introduced by Marie Jo Char which had the objective of promoting the private sector in the region through engaging the entrepreneurs with the policy makers through constructive dialogues (presentation available here). The project, which has many different objectives, is a good example of how NGOs can have an important role to play in enhancing this sector through projects that involve the domestic institutions and using the funding of international donors. The EBESM is funded by the European Commission and the GIZ. 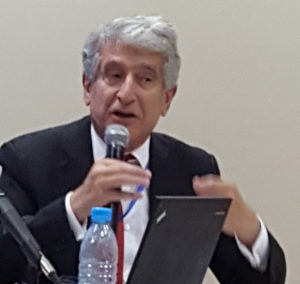 In Lebanon, the SMEs have encountered many challenges for their development as the country was emerging from the war in the 90s. The establishment of Kafalat provided the guarantee necessary to secure loans for SMEs, which had a huge impact on developing this sector. Dr. Khater abi Habib (CEO of Kafalat) highlighted that they targeted specific sectors, which were believed to be most in trouble and whose contributions towards the economy were considered essential (agriculture, industry, tourism, tradition crafts and high tech). Other programs were later introduced by Kafalat that promotes innovate start-ups.

A different, but also successful experience was adopted in Morocco through the National Committee for Business Environment: a committee that was established by the Moroccan government to develop a dialogue between the public and the private sector with the aim to enhance the business environment (presentation available here). Since its creation in 2010, many institutional and regulatory reforms have been implemented through this committee which has benefited the private sector and which has made Morocco jump 60 places in its Doing Business Report ranking.

Complementing the macroeconomic and the microeconomic picture around the private sector development, the third session looked at the issue from an external perspective, that of the international Community. 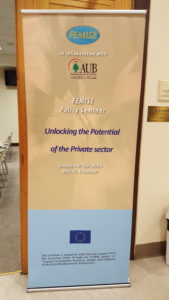 “Unlocking the Potential of the Private Sector in South Med Countries”, photo FEMISE

Finding more innovative ways to sustain their partnership with the South Med countries is the European Commission new approach to be more responsive to the needs of this region. The revision the EU-Neighbourhood policy was a first step, which was followed by many others at different levels (Macro, Meso and Micro) through regional and bilateral cooperation. The Commission is providing support to the private sector through blending by engaging the Neighbourhood Investment Facility (NIF) in cooperation with financial institutions like the EIB, the EBRD and the EU member states bilateral agencies. Working on providing an enabling environment for the private sector has to go in parallel with policy dialogue, which was what Ms Malin Elander Oggero (The European Commission) explained during her elaborate presentation (powerpoint available here).

At the OECD, the MENA competiveness program has been established to provide support to the MENA region’s development. The approach adopted by the OECD is to compare policy experiences, identify problems, find common solutions to these problems and exchange good practices. These practices are transposed through recommendations and soft law advices and according to the country’s pace and institutional setup. In this way, the OECD is helping to setup an adequate policy framework that encourages the private sector development, while being attentive to its needs. Dr. Nicola Ehlermann (OECD) believes that while it is the government’s role to set the environment and framework for operation, the private sector needs to be involved through constructive dialogue. 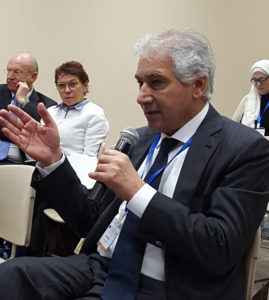 The International Financial Cooperation (IFC) of the World Bank Group has adopted a model that serves the SMEs in the region through enhancing investments and providing recommendations. Dr. Marcel Rachid (IFC) explained that the SME finance group identified key important lessons learnt from successful experiences, which could be summarised as follows: developed strategies need to be specific for the country, there is a need to have the necessary infrastructure to ensure transparency, developing SMEs rating agencies and encouraging venture capital (VC) loans for the private sector is important to develop the sector.

At the end of the session, Emmanuel Noutary (ANIMA) pointed-out to some key challenges that he detected through his 10 years experience working with SMEs. Despite the resilience of the economies in the South Med countries, there is lack of efficiency (50% of FDI are in sectors that do not create enough jobs); R&D is at a low level and is dominated by the public sector; South-south integration is far from its potential; there is a lack of efficiency and coordination among institutions and agencies that deal with the private sector; there is lack of coordination between education, industrial and social policies. He also added that organizations such as ANIMA could fill the gap of linking private and policy makers and bring SMEs together to coordinate and benefit from spillover effects. 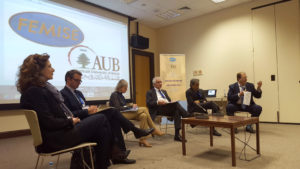 The final roundtable discussion evolved around the importance of ensuring: that the macroeconomic environment is balanced and encouraging for the private sector, the adoption of inclusive approaches to ensure the contribution of the whole society and that they take part in the distribution process, that we have a holistic approach to ensure that the adopted policies are encouraging the private sector, the importance of providing incentives to move from the informal to the formal markets. Dr. Galal (FEMISE) concluded by saying that we need to have the right balance between what economists propose as technical and social solutions and what politicians adopt as policies.