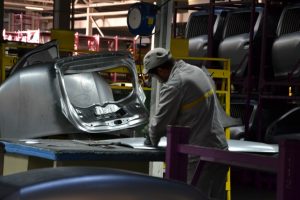 The relocation of production from Asia to the Mediterranean countries which started in 2017 is moving forward. In the same way as Spain or Eastern countries, Morocco has a card to play due to the proximity of European consumption basins and the importance of maritime connections. However, despite the reforms undertaken by the Cherifian kingdom and investments in infrastructure, the country’s growth remains insufficient.

It should be remembered that Tangiers is above all a trans-shipment hub for East-West and North-South flows. The unemployment rate remains at a high level and export dynamics are insufficient. Enter Femise researchers which have thoroughly analyzed the Moroccan economy. They identified five levers of action that they detail in a report entitled ” Identification of barriers to the integration of Moroccan SMEs in global value chains“*

A need to act on logistics, corporate finance, market knowledge, intervene on human resources and stimulate innovation … After a long research process, surveying firms, universities and professional federations in Morocco, in September 2019, Femise published a report aimed at placing Moroccan SMEs in the running, to position them at the heart of value chains. “Despite active sectoral policies and a number of reforms, the dynamics of Moroccan exports remain insufficient in view of the efforts made. While SMEs represent 95% of Moroccan enterprises, about 40% of GDP and 46% of total employment, they account for only 31% of exports. The purpose of this report is to identify the obstacles to improving the business environment and integrating Moroccan SMEs into the global value chains. The acceleration of exports will therefore only increase the integration of Moroccan exporting firms into these global value chains, “says Femise.

The document of about fifty pages suggests some avenues for public policies foremost among which is logistics. Although efforts have been made with the creation of the Moroccan agency for logistics and with the extension of Tangier Med, the fact remains that SMEs do not have access to logistics platforms both because of their cost and of their remoteness. Femise thus suggests grouping SMEs on specific areas so that they benefit from the massification of flows. Another path envisaged by Femise is access to international funding that could be facilitated with the creation of a specialized public bank in the wake of national institutions Bpifrance or Eximbank.

Since 80% of global trade is made between companies as part of these international production networks, integration into a value chain requires knowledge of the markets through support from Economic Advisers or through increased presence on trade shows. The objective according to Femise being to privilege a constructed approach. Innovation is also a differentiating factor in competitive markets. This is why the report encourages developing partnerships with universities and stimulating business flows to attract foreign direct investment. Investing in human capital is also an asset for Moroccan companies according to Femise.

This document has been produced with the financial assistance of the European Union within the context of the EU-FEMISE project “Support to economic research, studies and dialogue of the Euro-Mediterranean Partnership”.. The contents of this document are the sole responsibility of the authors